Barcelona vs Liverpool | Past Three Fixtures

Liverpool play Barcelona in the semi-final of the Champions League to try and reach the final for the second year in a row. To get you in the spirit for the game I have recapped our most recent three fixtures against the Catalan giants which includes a big win for the Reds at Wembley.

Liverpool played Barcelona in the International Champions Cup during the preseason prior to the 2016/17 season at Wembley at gave the Spanish side a bit of a hiding.

The Reds went ahead after fifteen minutes. Sadio Mane finishing after a clever pass from Adam Lallana that nut-megged Mascherano in the process. As for the finish from Sadio, it was a brilliant finish when the ball appeared to be caught in the Senegalese winger’s feet.

The first-half finished with LFC one-nil ahead. All Barcelona’s opportunities in the first half appeared to come through Lionel Messi who beat Mignolet seven minutes after the opening goal but saw it kept out by the post. Suarez had a chance too on the stroke of half-time but was denied by a superb save from Simon Mignolet.

As it was a friendly, there were lots of changes at the break for both sides and it didn’t take long to see the next goal. Former Liverpool man Javier Mascherano turned the ball into the back of his own net from a Sadio Mane cross.

It was 3-0 just a minute later when Divock Origi burst through the Barcelona defence and finished passed Claudio Bravo. 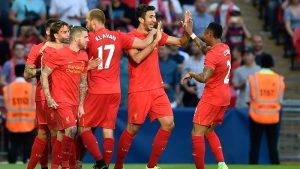 Marko Grujic made it 4-0 in second half stoppage-time with the best goal of the day, a crazy header lobbing Claudio Bravo. I’ve watched this goal several times since 2016 and I’m still not quite sure how he did it.

We will start with the shit 1-0 home defeat shall we. The Round of 16 second leg in the 2006/2007 season, second leg ended in defeat for the Reds at Anfield.

Liverpool hit the bar twice in the first half through a thunderbolt from John Arne Riise and Momo Sissoko finding himself with a open goal to shoot in from distance Victor Valdes was forced into making a double save after strikes from Bellamy and Kuyt before the ball was cleared off the line by Carlos Puyol.

In the second half, it was Barcelona’s turn to hit the woodwork. Ronaldinho shooting powerfully but being denied by the post.

It was substitute and former Chelsea man Eidur Gudjohnsen who got the breakthrough goal just four minutes after coming on which gave Barca hope after a 2-1 defeat for the Catalans at the Nou Camp but that was to be the only goal of the game and the Reds went through on away goals.

The first leg of that 2007 Round of 16 where Liverpool won at the Nou Camp, scoring two very important away goals in the process.

Barcelona started well and had a goal ruled out for offside though replays suggest that Messi was actually onside when the ball was played. It was the home side who took the lead through a Deco header after a cross by Zambrotta.

Two minutes before half-time, Liverpool drew level, Craig Bellamy the scorer. As the cross came in from the right hand side, Bellamy found himself unmarked and his powerful header was carried over the line by Barcelona goalkeeper Victor Valdes.

With a quarter of an hour left on the clock, a defensive mishap from the Catalan Giants allowed John Arne Riise to finish brilliantly and put LFC in the lead for the first time in the match.

With the Reds playing at the Nou Camp on Wednesday they will be hoping for a similar result to the 2-1 victory in February 2007 and hoping to keep Messi quiet.

There have been two times in 42 games that Barcelona have lost to English clubs at the Nou camp in European competitions and both of those came against Liverpool.

Let’s make it three on Wednesday fellas. Up the Reds!