Liverpool travel to Wales to play Cardiff City in their 35th Premier League game on Sunday. The Reds qualified for the semi-finals of the Champions League on Wednesday past, after a 4-1 win over Porto. This win will hopefully give Klopp and the rest of his team a much-needed boost for the game on Sunday and for the rest of the season. Neil Warnock’s side currently side 18th in the Premier League table and will be just as hungry for the three points to try and aid them in their fight for survival.

Cardiff City have not beaten Liverpool in a competitive match since the 19th of December 1959! Cardiff won that game 4-0 at Anfield. Since then both sides have only met a total of five times with Liverpool winning a League Cup tie and three Premier League games. The last time Cardiff came up against Liverpool at home, Luiz Suarez banged in a hat-trick and Martin Skrtel also bagged himself a brace in an astounding 6-3 win to The Reds. The reverse fixture at Anfield earlier on this season ended in a comfortable 4-1 to Liverpool with Salah (x1), Shaqiri (x1) and Mane (x2) all getting on the scoresheet.

Neil Warnock will be without one of Cardiff’s best defenders Sol Bamba who is still out injured with a very serious knee injury. The Bluebirds will also miss goalkeeper Alex Smithies, attacker Callum Paterson and defender Matthew Connolly who are all injured. Warnock will be assessing the fitness of two key midfielders Aron Gunnarsson and Harry Arter who have calf and back problems. The boss will make a decision on the midfield duo closer to the game on Sunday. Warnock made comments on the midfielders saying, “Gunnars had a spasm in his back Tuesday, but I think that’s just old age” and “I wouldn’t have thought Arter would be available.”

Now onto my predicted line-up for the game. I feel Warnock will go into the game with his preferred 4-4-1-1 formation. I believe Neil Etheridge will start in goal behind a backline of Peltier, Manga, Morrison and Bennet. I then think the four man midfield will consist of Hoilett, Gunnarsson, Rals and Murphy. This leaves Camarasa in-front of the midfield just behind Oumar Niasse at striker.

Hopefully come Sunday, Spurs will have took points of Manchester City as they meet at half 12 on Saturday morning. However, regardless Liverpool must win this game and come away with all three points. This should then put pressure on City for the Manchester derby. I’m going to go with a 3-0 win to Liverpool with Salah, Van Dijk and Mane all scoring. Tell me what you think the score will be, COME ON YOU REDS!! 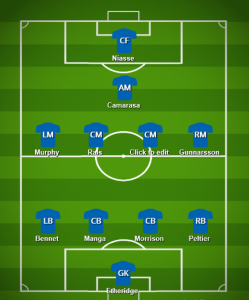