The second cup final of the season should hopefully provide the same result as the first, but it would be much easier if Liverpool could brush aside Chelsea in 90 minutes this time around.

A slight hamstring injury to Fabinho means the Reds will once again be without their strongest midfield after Thiago missed out last time round, but Jordan Henderson is more than good enough of slotting back into the holding midfield role. Thankfully, the latest reports suggest Fabinho will be back for the Champions League. 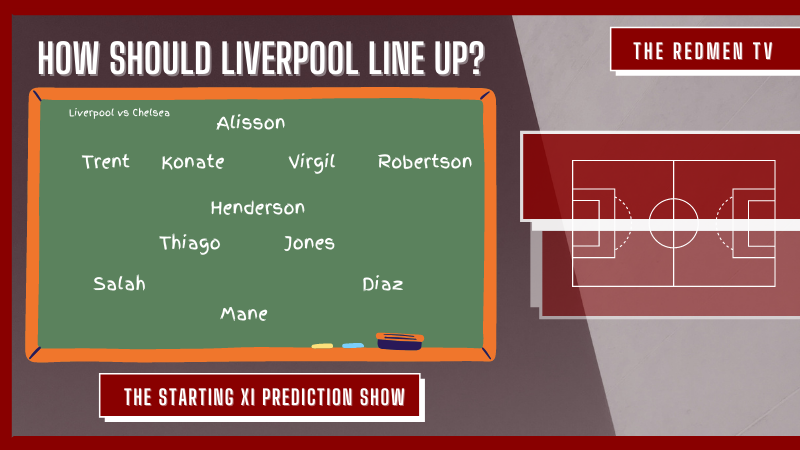 While Caoimhin Kelleher was excellent last time around, we’ll  see Alisson have his turn for this one. Vital minutes for Kostas Tsimikas in midweek allowed Andy Robertson some rest to come back into the side, and it looks as though Klopp’s only decision is going to be whether to go with Joel Matip or Ibrahima Konate. Considering Thomas Tuchel’s threat on the counter, I’ve gone with Konate to start.

Henderson starts from the six in place of Fabinho, with Thiago in front. The final midfield place looks to be between Naby Keita and Curtis Jones given recent matches, and it’s a difficult one after Jones shined at Villa Park. I’m going with Jones.

Luis Diaz is the man most in form at the moment from the forward line, while Sadio Mane has been impressing from the central role. Unfortunately, though, Salah’s form is nowhere near what it was at the start of the season – but he’s still the best we have for that position by some distance. While it’s unfortunate for Jota to miss out, he could have a huge part to play from the bench if the Reds need a goal. I’d like to see Jota start from the right if Salah’s slump of form continues, but, for now, let’s stick with the Egyptian King.

Chelsea’s form has dipped since earlier on in the campaign, and that should hopefully play into our hands to help make a more comfortable game to watch. We’ve played 300 minutes against Chelsea  this season and drew all three matches. Tuchel and Klopp’s everlasting chess match must end soon – and it may be the dynamism of Diaz that helps secure checkmate.

I think the Reds will take a 2-0 lead at some point in this one before a late-goal makes it an inevitable nervous ending that follows a Henderson shuffle and Jurgen Klopp dance to Dua Lipa.

How does Chris think we will line up? Check out the starting XI prediction show below!