DANIEL STURRIDGE: A FAREWELL TO ARMS

It’s October 2013 and I’m tucked up high in the Upper Kemlyn. Below me Raheem Sterling is having a bit of a mare on the right and can’t cross a thing as Liverpool attack the Anfield Rd end. Victor Moses is doing more barging about than passing and Luis Suarez, newly returned from another ban, has already scored.

I’m so far back and so myopic that anyone near the Annie Road/Main Stand corner flag more resembles a collection of pixels than a human form so it’s irritating that I can’t quite make out who is over there turning a Crystal Palace full-back inside out. He gains a crucial yard and fires into the far corner a la Divock Origi. I go nuts, but still can’t work out who it is.

The figure trots to the corner flag and is mobbed by his team-mates. As the melee breaks up the player turns to the stand and starts moving his arms up and down while rolling his head.

Those were the days when a Daniel Sturridge goal was a regular thing. From the end of the following season all such strikes were greeted with the suffix ‘if we can just keep him fit.’ Of course, he rarely was and that’s been a huge loss to the six time European champions.

There were some initial misgivings at his arrival from Chelsea in January 2013. Accusations about his attitude and mentality issues were abound as the board parted with £12m for his signature. Why was Rafa Benitez so keen to sell him to a rival? Why had he never settled at Chelsea or Man City? Was he trouble?

A month later he’d scored in his first three Liverpool games—a feat managed only by the great Ray Kennedy in 1974-5—so that put paid to that. Coupled with the signing of Philippe Coutinho he gave the Reds a new sense of optimism in the final months of Brendan Rodgers troublesome debut campaign.

Of course, it was 2013-14 where he truly shone. With Suarez banned for the opening ten games, Daniel took it upon himself to lead from the front, delivering six goals in the first six goals including all the goals in the three consecutive 1-0 wins which opened up the season. 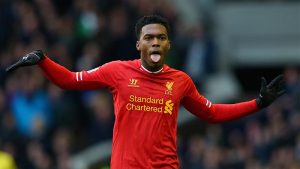 By the end of it he’d been eclipsed by Suarez and the Birmingham born forward was suddenly a second striker rather than the main man.

Anyone looking for signs of ego at that point would have been disappointed. Sturridge recognised the greater good and embraced the role of Suarez’s partner. The only time he showed arrogance was trying to outdo the Uruguayan on the pitch. When West Brom visited Anfield Suarez had a hat-trick in the bag including my favourite goal of that season—a header while running full-on from outside the box—before the hour mark. Daniel wasn’t having that and, though he couldn’t match three goals, he was always capable of equalling the quality. With the game at 3-1 he took the ball outside the corner and chipped it over Boaz Myhill. The ball must have been in the air for about five seconds and the keeper didn’t enjoy any of them. It was an incredible finish. Genius. Touchline. Arms.

Then injuries took over and it became clear that he could no longer trust his own body. Steven Gerrard made reference to his No. 15 not being mentally right when returning from a long spell on the side-lines and there were times when had to be cajoled to play at all. A lot of people saw this as swinging the lead, but if you’ve spent so much time out it’s only natural to be cautious.

His chances became limited once Roberto Firmino was given his proper position and again the naysayers rolled their eyes at fresh news of another breakdown. In a 2017 pre-season game he scored a delightful goal against Bayern Munich, sprinting from the halfway line to chip the keeper, but in doing so he pulled a muscle in his left thigh. Commentators would say that it was the most Daniel Sturridge moment of all time. All of the skill, all of the injuries, none of the luck.

Jurgen Klopp made noises about there being different types of pain in a guarded slight at the striker, but Sturridge simply wasn’t a Klopp player.  Possessing none of the work-rate or press of Firmino,   the team had to change with his inclusion. He was still a strong option from the bench, but as the months passed so did any hope of regular football.  In the end, Divock Origi usurped him as first sub option.

His spell on loan at West Brom was also blighted by injury.  He made just six first team appearances with no goals to show for them. His return to Anfield was unheralded and it was only a matter of time before he would move on.

He came on as a substitute of the opening game of the season at West Ham and scored with his first touch. He also casually knocked in the Goal of the Season in the dying seconds at Stamford Bridge to secure our unbeaten start.  He could still do it, but just not regularly enough to warrant a first team place.

I’m elated that he ended his Liverpool career with the biggest of all trophies as he played a huge part in the post-Hodgson age. Not every Red will mourn his departure, but there’s something to be said for a player who netted 67 times in just 160 appearances.

He’ll be missed in the dressing room too. Every clip of him on LFC TV with his team-mates shows him to be affable and courteous. There’s a whole narrative about him being arrogant, but I’ve never seen it.

He came, he scored, he did the arms. I hope he’s remembered fondly.

The Jimmy Case Cup Final goal for the new generation. A strike from the outside of the left boot and curled into the far corner. An absolutely obscene finish and one worthy of winning any trophy. Sadly, Liverpool downed tools in the second half and the goal is lost to anyone outside the Red world.

Liverpool are a goal down and look destined to lose their first game of the season and, subsequently, ground to Man City. With a minute left, Sturridge, who has only been on the pitch for three minutes, collects the ball from Xherdan Shaqiri and sand-wedges it past the most expensive goalkeeper in the world.

Another half-forgotten gem. Liverpool are two up and rampant in the Anfield derby. Sturridge scored the second and two minutes later he latches onto a through ball from Mamadou Sakho and finds himself with the ball bouncing behind him as Tim Howard approaches. No problem.   He simply turns his back on the keeper and lifts it over his head to make 3-0.   There are no arms on this occasion.   Instead he just stares at the Everton end like a drunk looking for a fight. When asked about it later he said: ‘Sometimes you just have to tell Everton what time it is.’ Love that man.

The height of the Suarez-Sturridge partnership though Daniel started this one on the bench. This game was mad with even Aly Cissokho scoring. It’s 4-3 to the Reds with a few minutes to go. Sturridge is sent clear but his shot is saved by Jack Butland at his near post. He’s unable to stop his run and falls over the by-line.  He’s first up, chests the bouncing rebound then heads it before volleying in from close range. Arms. (Goal at 2:30)

Yeah, that one. The Guardian reported that it was reminiscent of Kenny Dalglish.  I’m sure he’d take that.