Much has been made over Liverpool’s lack of cover for Andy Robertson following the departure of Alberto Moreno but do Liverpool really need to head into the transfer market to address the apparent lack of depth there?

Losing the Spaniard has of course left Liverpool short on paper in that position but with veteran James Milner being the go-to deputy last season Moreno leaving doesn’t necessarily mean that Liverpool need to go out and splash the cash this summer.

Liverpool’s resident left-back Andy Robertson is arguably the best in the world right now and so finding a quality player to provide cover for him whilst still being happy to sit on the bench for 90% of the season is no easy task.

Last season the Scottish captain averaged 2.2 tackles and 0.8 interceptions per league game whilst only committing 0.5 fouls.  Offensively Robertson gets even better with the defender providing an average of 1.4 key passes per league game with his 11 league assists being only second to Trent’s 12. Liverpool’s reliable left-back is so good that it is almost a problem with any potential addition knowing full well that they are almost certain to be warming the bench for large parts of the season. 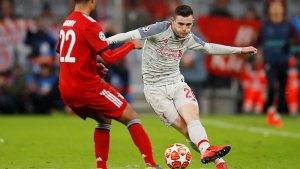 Being Robertson’s understudy does mean that your playing time will almost certainly be limited to the odd cup game and substitute appearance and for many that is something that would impede their careers. Liverpool’s last backup man, Alberto Moreno, was far from the perfect player but he was too good to let rot on the bench and ultimately was allowed to leave upon the expiration of his contract with his move to Villareal showing that he has the quality to still play at a high level.

Finding a player who is able to come into the side without lowering the overall quality is near impossible when such players will fully know that their chances of cementing a first team place is next to zero. I did have Junior Firpo, a player who would have been able to add cover further up the field too, and Felipe Luis in this article but during the week my laptop was broken both players secured moves to new clubs…

Alaves’ Ruben Duarte may be attracting interest from Liverpool given the former Espanyol man’s vast amount of experience despite still only being 23 years old. The Spaniard averaged 2.2 tackles and 1.7 interceptions per La Liga outing last season and whilst he did accumulate 10 yellow cards and 1 red card in 33 games, you’d expect the youngster to iron out that rashness under Klopp.

His offensive stats are a cause for concern with his low pass success rate of 67% not yielding a single assist last season and although he may be a solid addition defensively, Liverpool rely on their full-backs to provide that creative spark and I’m unsure as to whether Duarte could provide that.

His defensive stats put him at around the same level as Robertson and whilst there is much more defending to do at Alaves than at Liverpool, he is clearly good at what he does with Manchester City also having been linked with the former Spanish youth international.

It is rumoured that Duarte has a release clause of around £17m and given the nature of the current transfer market, Liverpool could do well to poach the Spaniard and ensure that Liverpool remain covered in such a vital position.

Sampdoria’s Nicola Murru could certainly be an exciting addition with the Italian man racking up 5 assists for the mid-table side in 34 starts. With a pass success rate of 78% we can see that Murru is good on the ball with his 0.9 key passes per league game also being very respectable. 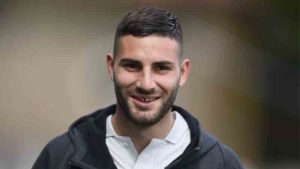 The 24-year-old is also strong in the tackle with Murru making 2.4 tackles and 1.2 interceptions per game whilst also managing 2.1 clearances, showing that he is a no-nonsense defender who is also capable of playing out from the back and providing some creativity in the final third.

Valued at around £7m, it would likely take an offer of around £12-14m to steal him away from the Genoese side but even at that price the former Cagliari man would be good value for money in today’s market.

A player Liverpool have been publicly linked with by the media is Augsburg’s 25-year-old Philipp Max, not to be confused with Dortmund’s Max Philipp who is the same age. The Augsburg man had a relatively quiet season last time around by his standards with the German defender only racking up 4 goals and 2 assists in 18/19 when compared to his 2 goals and 12 assists the previous season in 17/18.

Last season Max only averaged 1.2 tackles and 0.7 interceptions per Bundesliga outing but it is worth noting that the former Karlsruher SC man 14 of his 30 league appearances further up the field acting as a defensive midfielder, a left sided midfielder and even as a left forward.

The German is an excellent crosser of the ball and is a great option in set piece situations too with Max often looking to play the ball directly to his teammates whilst also regularly finding himself in dangerous positions in the final third. Max is valued at £18m and has been attracting the interest of Arsenal and Newcastle with Barcelona also eyeing up the German before they instead made a move for Junior Firpo.

Liverpool may not need to look for an option elsewhere though with both Yasser Larouci and Adam Lewis looking to force their way into Jurgen Klopp’s side and given they both had their pictures taken with the first team on August 6th, the boss may well be planning on using them this season.

Both lads have bags of potential with the former La Havre man Larouci stealing the show during his pre-season cameos whilst Steven Gerrard stated during his time coaching the youngster that, “I haven’t seen anyone as good as him at that age, in terms of quality and what he can deliver in the final third.”

It would of course be disappointing to not see Liverpool made a move for an established player this summer to bulk out the squad but should Jurgen go into the new season with what he has, I’m certain that both Larouci and Lewis, along with the reliable James Milner, will be able to chip in whenever they’re called upon.