Article by Jonathan Reid @mrjblade  Heroes. Heroes are important to us, for a whole host of reasons, not least because at some point we’ve all had them in one form or another in our lives. Some have stayed, some we’ve outgrown, real or fictional – it doesn’t really matter. Heroes are important to us, as people. Which begs the question, well why is that? And that’s something that’s a little bit harder to define in a clear way. Let me explain. Think of a hero in your life, any of them. Why are they a hero? What makes them heroic? For most of us it’s a moment, something that they do that marks them out as special, as different from us. You see this throughout life, think Gerrard against Olympiakos. In fact, think of any Steven Gerrard moment throughout his Liverpool career and you’ll find those moments. Istanbul, the 2006 FA Cup final, any game against Everton, the list goes on. Stevie G showing you, me, them, everybody why he was such an important figure to us as a supporter base, and a club. Stevie G making the impossible possible in wild glorious moments. Stevie G, one of us, showing them – those other lads – what we’re about.

Moments are important then because they define a place and a time where something happens. Where life, in one way or another, gets set on a course by the events that happened before it. Heroes, so we tell ourselves, are great at those moments. They’re the great architects of those changes that let something BIG happen. You see this in fiction too, especially in super hero movies. There’s a reason the ‘snap’ in the MCU has become such a well-known and iconic moment in the last year or so, because it has a before and an after. For those who don’t know, Thanos – the big bad of the entire 22 film run of the MCU – steals a magic glove and snaps his fingers erasing half the population of the universe. Our heroes are defeated, but don’t take it lying down and set out to fix what he’s done by the end of the second film. It’s a significant moment and, if you take the two films as one, comes right at the half-way point of the movie. You know what happened before and what came after the event, and we remember and love our heroes, but especially Tony Stark, for how they seek to change it. And yet there’s something slightly problematic with that setup, because it isn’t just that moment which makes their story significant is it? The great conundrum of the recent Avengers and MCU movies has been the question of identity and the tension between it and heroism. It’s a big part of the dynamic between Iron Man and Captain America and littered throughout all their movies – especially Civil War – and writ large in those two most recent Avengers films. Not just can we be heroes, but what kind of heroes are we? Do we defend society or lead it? The snap isn’t important so much for what it does, but what it represents. Are you with Thanos or against him? Are you prepared to give something of yourself to stop him and reverse what he did? It’s a film in many ways about identity, about who we choose to be as people, and it asks questions of its heroes. Ultimately it takes an act of extreme selflessness to fix what’s gone on, and things are restored mostly to normal. Heroes then are important, but they’re important because they fundamentally help define our identity in some way. Even the two earliest works in Western culture, the Iliad and the Odyssey, are about significant moments but, more importantly, how we identify and define ourselves as people. We delude ourselves into thinking of heroism as happening in these big ‘moments’, but actually it happens over time and is mostly about selflessness. It’s why Batman vs Superman doesn’t work.

It’s the lesson Homer learns about why bowling a 300 game isn’t important. Think back to those Steven Gerrard moments, you don’t just love him because they happened and he made them happen, you love them because of who he is and what he represents to you as a person. The local lad, the never-say-die attitude, the commitment to bringing those around you with you, to making the impossible possible. He isn’t just a hero because of moments, but because he fundamentally embodies something integral about what it means to love and support Liverpool FC, to be a red, and therefore something about how you define yourself. Identity and heroism are fundamentally linked and are a key part of the stories we tell ourselves about who and what we are. That’s why we love Steven Gerrard and why we love those moments. For me, there was a moment that was particularly significant between me and the club. One at some point back in 2011 where I knew I was in this for the long haul, this Liverpool thing. It was Dalglish’s first press conference back as Liverpool manager, accompanied with the fervour everyone would expect; but it was his opening words that hooked and pulled me in closer to this club in ways I’d never been previously:  “All I can promise is my very best. And, if its good enough, hopefully we’ll have more happier days than sad”. I was living away from home at the time, unmoored from my parents and friends I’d known since childhood, well into my first year studying at University and doing everything I could to try and bring some sense of who I was or wanted to be with me. Now, Dalglish had always been a mythic figure in my life, referred to in reverent tones and a roll of the eyes by family members whenever I’d have the gall to proclaim that no footballer could ever have been better than Robbie Fowler as a five-year-old.

He was the ‘but’ at the end of all sentences, the qualifier; “yes they’re a good player but, they’re no Dalglish”, “he’s a good manager but, is he Dalglish” – no one was ever Dalglish, no one could be. He pervaded my life as Liverpool supporter as a form of mythical ‘other’, some great beyond that existed only on crackly CRT screens and VHS, a cataclysm I somehow missed purely through being born too late, that was universal and absolute. He was football and truth in its purest form. So this press conference meant a lot to me, my nascent love very quickly becoming a hardened fanaticism. It was the unicorn existing, the return of the king, the mythical hero come home. And yet, what struck me most about him, in that soft-spoken Scottish drawl, was the humility of the man. No brash, Ferguson pounding of the chest, just a promise to work his hardest and be the best version of himself he could for those around him, to be selfless. And, for some reason, it all made sense then – it just clicked. I loved Kenny too, of course I did – he is Liverpool, he embodies the club, its values – but also he is a living embodiment of that reason we all fall in love with this mad game, hope. The belief and sheer joy that better things can happen and are within our power to make them so, if we try our hardest. And suddenly I knew more about what it meant to be from this city and love this club. Fast-forward several years and here we all are, sat on the brink of our second Champions League final in as many seasons, hoping we will win, but knowing that we’re without question one of the best teams in Europe, despite some huge odds being stacked against us along the way. It’s hard work that’s brought us here, and the moments have been frequent and live long in recent memory, not least THAT Barcelona game. 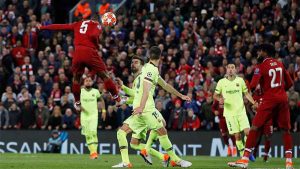 The cast of characters have all played their parts along the way, the steely resolve of Alisson and Van Dijk, Jordan Henderson’s never-say-die attitude, our Egyptian King dancing his way through a second season. But even the peripheral figures have all played their roles along the way in the last few years, Lovren’s goal against Dortmund, Chamberlain’s against City, big Div’s against La Blaugrana. They’re all moments that told us something about this team, about these group of lads, and why we’re deeply, deeply in love with them. They were all moments of heroism and of selflessness, and everything the manager promised when he first asked us to come on this journey with him three or so years ago. There are some things in life you can’t get anywhere, but we dream they can be found in other people, other places, other things. Maybe that’s ultimately why we have heroes, why we choose to put some much of our own identity into other things, because we want to believe. That’s all Jurgen asked of us three years ago, and that’s all we’ve ever asked of the team. All we can all promise is our very best. And, if its good enough, hopefully we’ll have more happier days than sad. Believe Liverpool – and you’ll be heroes for more than just one day. Up the Reds Jonathon Reid – @mrjblade
Spread the love
Supporter's Section