Over two months on from their last meeting, Liverpool and Everton Women meet again in
the Women’s Super League on Sunday, and this time Goodison Park hosts this all-important
fixture.

On Women’s Football Weekend last November, the two clubs faced each other at Anfield in
front of 23,500 spectators in a game that saw Everton edge a 1-0 victory – captain Lucy
Graham with the crucial goal. 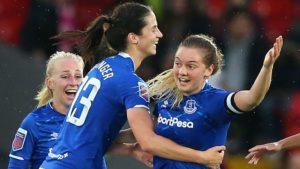 The reverse fixture represented a landmark moment for the women’s game on Merseyside
as both teams typically have some of the lowest attendances in the division and have done
for some time.

Liverpool’s defeat to the Toffees at Anfield could be regarded as the most painful of the campaign so far. The Reds played well across the 90 minutes in a performance fitting for the occasion, but a first half strike from Graham inflicted heartbreak on Vicky Jepson’s side. The hosts had their chances, Melissa Lawley came close in the opening stages, Kirsty Linnett drew saves from the Everton keeper and Rhiannon Roberts nearly gave them the lead moments before the visitors put themselves in front.

But the game took place in November, when Liverpool had only scored one goal in the league at the time – which was a penalty in their 1-1 draw against Bristol City. Confidence in front of goal was low, the Reds were lacking that clinical edge, but things have gradually changed throughout the season. Niamh Charles ended 2019 scoring in two consecutive games, in draws against West Ham and title contenders, Chelsea. 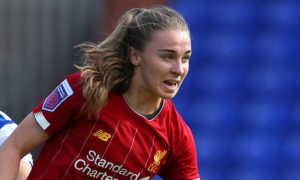 Jepson’s side then went on to earn their first league victory of the campaign, a 1-0 win over Bristol City last month, Rachel Furness scored her first goal for the Reds after signing in the January window. The team has progressed, and they’ll be hoping to put right the disappointing defeat at Anfield a few months ago.

12 points separate the sides, but form will go out the window

The Blues are currently fifth in the WSL, level on 18 points with Reading whilst Liverpool sit 11th, only goal difference separates them and Bristol City who are rock bottom of the table. Liverpool’s league position is disappointing for a club of their size and prestige, especially as the men’s team are flying at the top of the Premier League. The Reds may be toying with relegation, with a real battle for survival on their hands – but Sunday’s game presents a real opportunity to turn things around heading into the latter stages of the season.

Liverpool are likely to be lacking match sharpness after their game against Birmingham City was postponed last week due to the appalling pitch conditions at Prenton Park – their last game was on January 19 away to Bristol City. But, it’s never difficult for players to get themselves up for derby day and every single one of them will leave it all on the pitch on Sunday, more determined than ever to walk away with all three points. 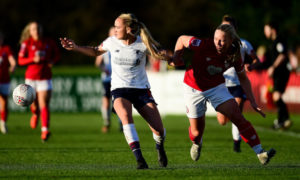 This game represents more than just bragging rights in the city, Liverpool’s league position means every point is crucial in their bid to remain in the top division next season. Everton suffered a shock defeat last time out in a 1-0 loss to Brighton and Hove Albion, Willie Kirk’s side will be eager to bounce back and return to winning ways. After finishing 10th in the WSL last season, the Toffees have turned things around both on and off the pitch in what has been a largely successful campaign.

Young stars like Chloe Kelly have lit up the league and she currently sits fourth in the standings for top goal scorer, the 22 year old has found the back of the net eight times this season, only six goals off Vivianne Miedema. The recent re-signing of Izzie Christiansen is a major coup for Everton after the Lioness has had a successful career since leaving the club in 2009. 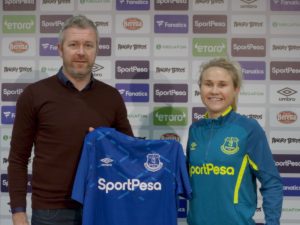 It’s time Liverpool gets behind its’ girls

The Merseyside Derby remains one of the oldest and most historic in the country, but it will take some time for that level of passion to translate into the women’s game. If Sunday’s match can come close to replicating the attendance at Anfield in November, it will mark another step forward for the sport is this part of the country. Hopefully those that turn up can start watching the two teams week in, week out – especially with Everton moving to Walton Hall Park later this month, a venue only a mile from their home of Goodison Park.

Increased interest and investment can only be a positive thing for two teams struggling to replicate the stature of their male counterparts, both are even some way off the teams at the top end of their own division. As women’s football continues to grow in the aftermath of a successful Women’s World Cup last summer, it’s important that two of the country’s biggest clubs don’t fall too far behind their rivals. Hosting arguably the biggest games of their season at the men’s grounds has been the obvious step forward for both clubs.

Football runs the blood of Liverpudlians, so it’s time to put Merseyside back on the map in women’s football and build two teams the city can be immensely proud of.