Fulham v Liverpool | How Should Liverpool Line Up?

Anyone keen for some Premier League football? A couple of months after Liverpool narrowly missed out on the league title, it’s time to start the quest all over again – this time boosted by a new number nine who kickstarted his competitive campaign with a strong performance against Manchester City.

The arrival of Darwin Nunez should see Liverpool’s front line transformed in a key area that cost points last season – dealing with the low-block. Nunez’s sheer physicality allows the Reds to be more direct without the need of using a substitute, as seen last season with the introductions of Divock Origi, and there is no better sign that the Uruguay international will be a success other than a goal against the Reds’ biggest competitive rivals. 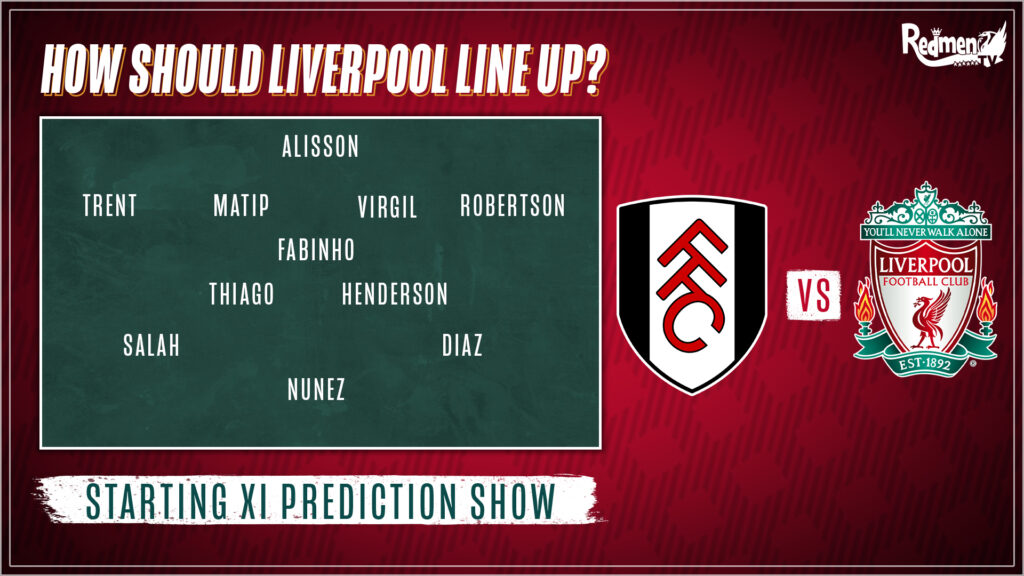 Alisson returns in goal after a minor injury in preseason as he looks to chase down another Premier League Golden Glove.

A knock to Ibrahima Konate during a friendly means Klopp’s decision is easy for this one – Joel Matip starts alongside Virgil van Dijk, with Robertson and Trent on the flanks. Given Fulham are likely to sit deep in this one, Matip’s ability on the ball was likely to see him start anyway.

There’s a case for Naby Keita to start with an eye on our opponents, but Jordan Henderson should play the opening day of the season after his performance against Manchester City. I don’t think Klopp can go wrong with any pick here – though the base of Fabinho and Thiago is what Liverpool should build around again this season.

Diogo Jota isn’t fully fit yet which means that the battle between Roberto Firmino and Darwin Nunez is the only decision for Klopp to make. With Fulham likely to invite crosses into the box from their rigid defensive shape, Nunez comes in as the target man with support from Salah and Diaz out wide.

In similar fashion to how Liverpool dispatched Norwich City on the opening day of last season, the Reds should be too much to handle for the newly-promoted side who face a Liverpool squad hungry for redemption after missing out on the quadruple in 21/22.