Georginio Wijnaldum And The Art of Subtlety

It’s not always easy to shine in a team that’s as effervescent and eye catching as Klopp’s Liverpool. Such is the quality of Roberto Firmino, Mohamed Salah and Sadio Mane that the rest of the players aren’t always subject to the same adorn and appreciation.

Virgil van Dijk and Alisson have earned their dues, raking in copious individual awards while Trent Alexander-Arnold and Andy Robertson represent two of the most exhilarating full-backs, in Europe, but go further afield and there’s perhaps a lack of gratitude for other contributors.

Georginio Winaldum falls under that category; an enigmatic figure who, in many ways, embodies the club’s transformation in recent years. 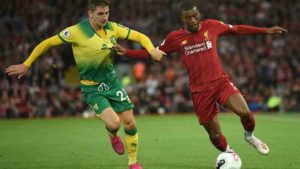 At Newcastle, he was tasked with an attacking role, scoring 11 times in his only season at St James’ Park, including a four-goal frenzy against Norwich. Now, he operates as a deep-lying workhorse whose tactical intelligence and positional awareness lay the foundations for the creative forces ahead of him.

He is the man beating the drum, ensuring everyone is attuned to one consistent rhythm. A role that requires him to be a tidy, meticulous passer of the ball, he dictates the supply lines as the enforcer and instigator of Klopp’s system.

Unlike some of his teammates, Wijnaldum’s impact isn’t always immediately obvious. He doesn’t score a multitude of goals, meaning he’s often out of the headlines, nor is he one to produce the expressive flicks, tricks and no-look finishes Firmino has made so customary. 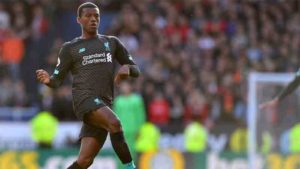 Yet, closer analysis reveals his prominence.

His primary task is to plug the gaps when they arise, showing intelligent positional awareness to protect the back four and outbattle the opposition alongside Fabinho.

Elsewhere, he presses intelligently to regain possession before shifting the ball on and driving forward, subsequently acting as the crucial link-man between midfield and attack.

In essence, he is not an avid creator nor a ruthless goal machine from deep, but a man whose close control and ability to wriggle out of tight spaces, shielding the ball, enables Liverpool to maintain the upper hand.

Fears that he would become lost in the noise of Liverpool’s £100m splurge on midfield talent last summer have been expunged, with strong will and determination reinforced by the trust of his manager.

The 28-year-old has proved he belongs, ringing to Klopp’s heavy metal tune to emerge as a key component in the side.

His recent showing on international duty for the Netherlands in their Euro 2020 qualifying match was representative of the style and swagger he’s established on Merseyside.

Second, a beautifully carved out move he orchestrated from start to finish, grabbing the goal his performance richly deserved to ensure victory over Germany. 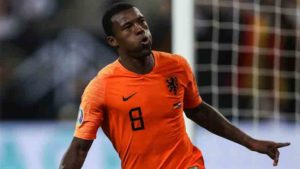 While his teammates appeared to be content with shutting up shop and protecting their 3-2 lead, Wijnaldum was aware, waiting for the break of play from a misplaced pass before driving forward.

Using his backfoot to take possession on, he instantly set in motion the Oranje’s move, simultaneously taking Toni Kroos out of the game in one fell swoop. His eventual strike was not the mark of a man whose biggest criticism lies in a lack of goals, but rather one of a confident marksman capable of assisting the forward line.

The third though, was the most impressive.

Stepping in to cut off Julian Brandt, he bullied the attacker off the ball with ease, holding him at arm’s length. Leading three German players on a merry dance, producing a flick for good measure, it was a performance of strength, skill and balance from the midfield maestro.

A silent assassin, Wijnaldum’s ability to recycle and retain the ball has formed the basis of Liverpool’s scintillating structure.

Albeit less aesthetically pleasing than the no-look finishes of Bobby Firmino, the long-range screamers of Mohamed Salah or the dazzling feet of Sadio Mane, Wijnaldum serves as an impenetrable presence within Liverpool’s midfield.

He is the beating drum of Klopp’s Reds. A master in the art of subtlety.