A lot of people have played their part in making Liverpool Football Club what it is today. 24 managers, over 800 players, hundreds of coaches, thousands of staff and millions of fans around the world.

But very few have played a bigger and more unique part than Gerry Marsden. 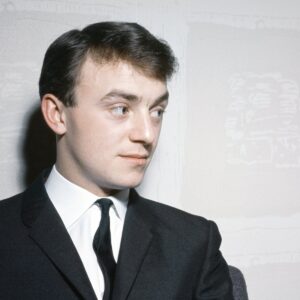 The Spion Kop has always been a special place, but it was particularly special in the 1960s. Bill Shankly’s Liverpool were promoted to the First Division in 1962, the same year The Beatles released their first single, Love Me Do. No one knew it at the time, but Liverpool was about to become the centre of the universe.

From 1963-64 the city produced 17 UK Number One Singles, three of which belonged to Gerry and The Pacemakers. The Pacemakers formed in 1959 and recorded their first single How Do You Do It? in early 1963. It went to Number 1 on the 11th April and the band never looked back. Along with The Beatles, their energetic and charming Merseybeat sound captured the hearts of the nation and changed the face of popular music forever.

Mathew Street’s Cavern Club was the heart of the city’s music scene at the time, and when asked what was so great about the Liverpool sound of the 1960s, Marsden said:

“The Beatles and ourselves (The Pacemakers) – we let go, when we get on-stage. I’m not being detrimental, but in the south, I think the groups have let themselves get a bit too formal. On Merseyside, it’s beat, beat, beat all the way. We go on and really have a ball.” 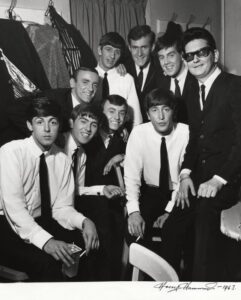 The Pacemakers with The Beatles and Roy Orbison, 1963

In June 1963, I Like It became Gerry’s second number one hit, and in October the band released a song from the Rodgers and Hammerstein musical Carousel, called You’ll Never Walk Alone. A spine-tingling version of a beautiful song, it became the band’s third number one single of the year.

1963-64 was also the year that Liverpool Football Club won their first league title since promotion a couple of years earlier, and with the majestic Bill Shankly at the helm there has arguably never been a more enjoyable time to be a Liverpool fan. With Callaghan, St John and Hunt tearing up the league, The Kop was bouncing and the songs coming out of the city at the time were the soundtrack to victory after victory.

Thousands of working-class people, still recovering from the horrors of the Second World War, suddenly had something to be hopeful about, something to be proud of. The BBC’s Panorama footage of the enormous swaying terrace singing She Loves You will never fail to give me goose bumps.

It is little surprise that the Anfield crowd also took You’ll Never Walk Alone to their hearts, with its lyrics lending itself perfectly to the ups and downs of supporting a football team, as well as having its own meaning to the lives of the people singing it. This, coupled with the fact that the singer was born just a couple of miles away from Anfield, led to the song being adopted as the club’s anthem. The song started off being played alongside the rest of the chart hits of the time before kick-off at Anfield, and it never stopped.

Gerry & The Pacemakers’ You’ll Never Walk Alone has been with Liverpool for much longer than any manager, player or owner has. It has been the soundtrack of tremendous highs and earth-shattering lows. Gerry’s tear-jerking performance at the 1989 FA Cup Final, which sees Liverpool and Everton fans arm in arm singing the song together just over a month after Hillsborough, is one of the most emotional moments in the history of this city and in the history of sport worldwide.

More recently, it has been a part of several of the biggest moments of Jurgen Klopp’s Liverpool tenure. In 2016, the FIFA Fan Award was shared between Liverpool and Borussia Dortmund for the pre-match rendition of the song ahead of our famous 4-3 win in the Europa League quarter-final. The German fans unveiled a ‘96’ mosaic, with the game played on the eve of the 27th anniversary of the disaster.

After The Reds’ 4-0 victory over Barcelona in 2019, the players lined up to The Kop and sang the song back to the fans, bringing even James Milner to tears. It is also fitting that George Sephton followed it that night with John Lennon’s Imagine, bringing together the voices which made The Kop sway all those years ago.

You’ll Never Walk Alone is a special song. It doesn’t just belong to Liverpool. It’s sang by fans from – amongst others – Celtic, Dortmund, Feyenoord & FC Tokyo. But when Liverpool fans sing Gerry & The Pacemakers’ version, it is unique. It is the most famous sporting song in the world because of Gerry Marsden and because of Liverpool Football Club. Gerry has passed on, but his music and his spirit will live on forever.

Tragic news this morning. We have lost one of the most treasured members of the ⁦@LFC⁩ family. We were honoured to welcome Gerry to Anfield in 2018, and he rewarded us by singing YNWA just before kick off. #RIPGerry pic.twitter.com/YLGUnuJCRz