How Klopp Laid Foundations For Premier League And UCL Wins

You must have seen it by now.

No, I’m not talking about the 2019/2020 champions posts, the celebrations within Liverpool, or even Virgil Van Dijk with the rest of his teammates dropping to the bass of Show Me Love. The one little segment of Liverpool’s title celebrations on Thursday that I’ve had on loop since it was leaked on Friday morning was the 20-second clip of Jurgen Klopp in front of everyone who were partying deep into the early hours.

It’s one of those videos that remind you of your elders having one too many beers and thinking they are down with the kids by attempting to copy their dancefloor routine. It was just great to see Liverpool’s backroom staff and players were chanting for the charismatic German to keep letting himself go as if nothing else mattered.

It summed up his character perfectly as it lowered the barrier of Klopp the manager and his players, instead it was Klopp the human being with his boys acting as one rather than two separate tags.

The bread and butter of judging a manager comes from how successful they translate their style of football ono the pitch which usually leads to Silverware. However, Klopp has proven over the last 4 years and 8 months that he has as big a personality off the pitch as he does on it.

As fans, it’s easy to buy into that through his passion he shows on the touchline but at the end of the day, we are not the ones who have to go out onto the field and play at such an intensity week in and week out. For this to work a two-way trust system was necessary as Klopp required his player’s support in his philosophy to the extent of running through brick walls for him, while his lads needed something who epitomised the father figure that no one wanted to let down.

Clips of the players celebrating in the event room they hired out suits the narrative so fittingly of them enjoying what the just achieved however the title win can be interpreted as fuel being added to the squad’s fire.

The hard part is getting the fire started.

This can be traced back to December 2015 when Klopp was assessing what he had at his disposal during his early days as Liverpool’s manager. What he knew was the inconsistency brought him two key results for completely different reasons, firstly the one every Red will remember fondly was ripping Man City apart away at the Etihad, but the more interesting one was a demoralising 3-0 defeat away at Watford (who knew lighting could strike twice) just before Christmas which had a unpredictable aftermath.

After one of the poorest performances in the Jurgen Klopp reign, there was an expectation amongst the squad that the scheduled Christmas party was going to be cancelled. Not only did it still go ahead but Klopp demanded that no one left before 1 AM, outlining the importance of building team spirit within his group no matter the results on the match day.

This was one of the important moments Jurgen Klopp had with his players as he demonstrated that even in the hardest of times, they had a manager who would back them in return for the players backing their best worst friend.

Fast forward 2 and a half years later, Liverpool found themselves on the verge of Champions League glory with only Real Madrid only standing between them and good old big ears being lifted in Kyiv.

There was that much of a good moment feeling in the LFC camp that the manager even wore Cristiano Ronaldo branded underpants above his shirt during a team meeting before the game to calm the nerves.

However, it was not meant to be as a mixture of misfortune through Mo Salah being forced off following Sergio Ramos’s best John Cena impression as well as two goalkeeping howlers from Loris Karius and a Gareth Bale wondergoal left a bitter feeling in the mind of everyone connected to LFC of what if.

Well everyone except one person.

The next morning a video of Liverpool’s charismatic manager with his baseball cap on backward and singing with his close friends about bringing back the European Cup from Real Madrid with all the luck was trending on Twitter. To the outside footballing world, it was a joke, a meme, and ultimately a stick to beat Klopp with. 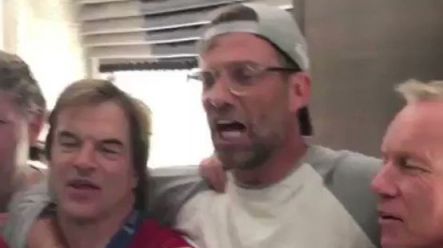 Yet it raised the message that if Jurgen Klopp could put the previous night’s disappointment behind him so quickly with optimism glowing from his beaming smile then why couldn’t we? It wasn’t just a message to us it was a statement to his players that we were all on the right path.

Again, using the negative and turning it into a positive helped accelerate the process. Where some may have looked at Kyiv and saw it as a sliding doors moment that this Liverpool team did not manage to get past, Klopp saw it as the next step in the process and backed his belief and enthusiasm in himself and his side that they would soon be the ones on the winning podium.