Where do you start after that? Honestly?

I’m up at 9am, pacing our landing, trying everything I can not to think about the game. I check my phone for a few minutes, make some light-hearted conversation, I see people mentioning their plans or having a lovely time in Madrid. Smile to myself. Fuck, I’m back on the Reds again, might as well pace. This isn’t working, back to the phone. Rinse. Repeat.

About 3ish I decide the only sensible thing I can do is get on the ale. I drink what can only be described as a small bar’s worth of beer before me and my dad bundle ourselves into the living room and watch the build-up. I’m still flicking through my phone and that’s when things start becoming transcendent.

I’m watching clips from the fan park and recognising my city out on the continent. Everywhere all I see is red. Left, right – red, red, red – as far as the eye can see. I see the TAW lads riling the crowd up, confetti cannons at the ready, Colin Murray applauding the crowd as they remind him that all you need is love (or Rush, there’s a varying consensus). John Power, Chelcee Grimes, the BOSS Night lads, John Barnes. Liverpool’s musical past, present, future, its football history, its football present and mostly importantly, its fans, on stage and off, sharing in a spiritual ecstasy about how great life is and can be when it’s shared with one another.

Every post I scroll past, every story I hear, they all share one word, one thread – joy. That priceless, unquantifiable thing, total selflessness and euphoria. Red is the only thing that pulls these people together, drawing disparate threads together through time and place into a glorious now. All that matters is the now, and it tinges everything, the light, the air, everything.

What strikes me most about all of it though is that operative word, fans. Everyone on stage is a fan, everyone off the stage is a fan, all of them fanatical about their love for this club and determined to share it with one another, all-comers included. We made this, this joy, this outpouring, it comes from us and defines us, but it’s ours and it’s something so very, very special. It’s so rare to see a community in the modern times whose key trait, first and foremost, is joy. But in that square, all of them are chasing that elusively spiritual thing. Young, old, first time, sixth time – it doesn’t matter. Past, present, future, in Madrid and bars and homes around the world: joy is universal. That’s what this team has given us.

A Weekend In Paradise
⭐️⭐️⭐️⭐️⭐️⭐️

The game itself however is anything but. The penalty seems implausible so early, I spend most of the build-up questioning how it could be possible. No matter, Salah bags and suddenly everything is fifteen times more real. I celebrate, but it rapidly becomes apparent that the goal isn’t the release I thought it was. Liverpool are mostly, to a man, woeful for the first 45 minutes. Forty-five incredibly tense minutes. I’ve moved to gin by this stage and I’m exploring all eventualities, full-time seems light years away and there’s no way this stays level in the second half.

It kicks off and Liverpool are somehow better, but not by much. Henderson, Mane and Alisson play out of their skins, but Spurs again look to threaten. Substitutes are made and I stare incessantly at the clock, as if begging it to suddenly roll around to 90 and have this hell be over. Around 70 I actively contemplate not watching for a few minutes the tension is killing me that much. It feels like I’m dreaming but I’m not sleeping, and I’m not sure if I can take this.

Liverpool suddenly decide to play football and from nowhere Origi scores – total release. I’m fairly certain I can hear people three streets away screaming. I spend the last few minutes hunched over the edge of my seat, putting my face closer and closer to the TV before the referee finally blows full-time. 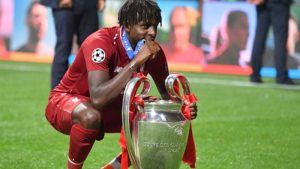 I take the full post-match in. I was 13 during Istanbul, too young to really celebrate or appreciate what I’d seen with any finesse, but old enough to know it was significant and that I’d spend a lot of the rest of my life thinking about it. I’m determined to savour everything of this – I hug my dad, punch the air, shout nonsense. It’s around this time I see the players, van Dijk specifically, crying and suddenly I’m crying too. I’m in bits in fact, so too are Henderson and Klopp, so too is everyone I’m texting and telling I love them. I want to see everyone, even the ones in Madrid.

Nothing seems real, but everything is pure and joyous. It feels like I’m dreaming but I’m not sleeping. Henderson hoists the trophy above his head and I’m back to shouting again. I spend the rest of the night liking every social media post I can find, crying some more (Henderson and his dad mate) and not watching the Good, the Bad and the Ugly while I feel a bit maudlin about those who aren’t here to share this with me.

I wake up the next morning at 9am, somehow not hungover, and decide to go buy every newspaper I can and visit my nan to share this glorious thing with her. It’s almost 1pm by the time I walk back into my dad’s house and by now we’re resolved that we’re going the parade. The game still hasn’t sunk in for me, it feels like I’m dreaming but I’m not sleeping. I’m still texting people and telling them I love them, along with periodically shouting ‘get in’ out loud. All the players singing Allez Allez? Get in. Henderson with his feet up on the cup? Get in. Him and Klopp carrying it off the plane together? Get, the fuck, in.

We decide to meet the team by the Navigator pub on Queens Drive and walk most of the way, the crowd increasingly thickens and periodically complete strangers high-five me. By 3pm we’re stood, with several hundred other people, quite literally in the middle of the road. Tom’s asked for footage for a video so I’m taking photos of everything around me, and the crowd just swells and swells. The entire roof of the Navigator is taken over by fans, each lane of the road, roofs and traffic lights are climbed and still more people arrive, everywhere red, red, red. The bus itself isn’t due until around 4.30, but time isn’t a thing anymore, not in a physically real sense.

Cars are still trying to negotiate their way, quite literally, through this madness, and are high-fiving everyone as they’re draped with flags, all except one lady who’s incredibly angry about the whole thing – I suppose she’s an Evertonian. One car opens its windows and plays YNWA which spreads throughout the throng and suddenly a flare is lit, next up is Allez Allez, then someone gives Si Senor a go, some time passes, and no one cares. Everything is just joyous and joy is universal, we’re all here for one thing and one thing only, to tell the team that, to share this glorious now with them.

I think back to the day before and the fan park, and I’m grateful we’ve had this for those of us who couldn’t make it out there. What strikes me most is just how many kids there are, all of them looking to be involved as much as they can. One girl next to me insists on being on her older brother’s shoulders for however long we have to wait for the bus. Two twins look up at their dad and repeatedly ask “So we’re actually going to see Mo Salah?” “Yes” “But actually here, on this road” “Yes, right there, trust me”. Another little group have brought a football and start their own Allez, Allez to the cheers of everyone around.

I think back to that fan park and smile, and I think of Jordan Henderson with his dad, needing to be held, a child again in shock of what they’ve done but for all the right reasons. Joy is universal, but it’s an incredibly human thing. The bus finally arrives and everyone erupts; it’s gone in seconds and by the time we’re home it’s still on Queens Drive as we sit and watch the highlights for the rest of the evening.

The players repeatedly mention how shocked they are by what they’re seeing and how happy it makes them. They’re as lost for words as we are, but the joy is ubiquitous. At some point I realise that around the world millions and millions of people are watching this, this entire city at a standstill and bathed in red, everywhere, red red red. History and exceptionalism are two dirty words often thrown at the city of Liverpool, but the joy on the streets is unquestionable. No other city, no other club, does this in this way. Suddenly I’m not dreaming or sleeping, but deeply proud and moved by my city and its people, each with their own little piece of this story. In time it’ll become songs, this joy, this glorious now; but for now it’s a deep pride we all share that’ll tinge everything, the light, the air, everything.

So little of the modern world is positive or founded upon joy, but that’s the gift that football gives us. There’s a scene at the end of BT’s brilliant Two Tribes documentary where Derek Hatton, for all his faults, says something incredibly prescient. He looks out from the city’s town hall, a site for so many of his political rallying calls in the mid-80s, and muses on the importance of football to the city of Liverpool.

“I wonder what it would’ve been like in the city if everything was going against, politically as it was, and the teams hadn’t been doing well. I mean it’s hard to imagine but that would’ve been more devastating. What actually kept people going was they knew that in terms of football teams we were the best in the world, be it blue or red. Can you just imagine that level of devastation going on, and there being no football victories? That would’ve been frightening”.

It’s hard to quantify quite what football means to people, it’s something tribal and pluralistic. Deeply spiritual and almost certainly given far too much importance. But it’s capable of bringing so many of us together in the best ways. So much of the world is in a difficult place right now, but the scenes from the last weekend remind us that fundamentally we share so much more than we think. Joy is universal, and Jurgen’s mad selfless Reds have given us that in spades this year. Jurgen’s Reds – Kings of Europe.

Have a glorious summer telling everyone you can you love them.