A tough game against a tough, stubborn and well organised and all be it frustrating opponent. Not the football we’d all like to see, one in which we berate time wasting etc but Villa did what they had to do. Well they tried and it didn’t work. I understand it from a lot of sides who maybe look at the players they have and don’t fancy going toe to toe with Liverpool, but I feel like Aston Villa are a bit better than that.

They decided to play the final few moments of the game and Martinez decided that he fancied taking his goal kicks a bit quicker.

The ref didn’t help. I don’t care that he gave the pen, he’s still atrocious. As are most, if not all the officials in this Premier League.  Just bewildering decisions each and every single game. Not just Liverpool, all of them.

Once again Mo is the difference, we as a collective have run out of superlatives for him and are getting bored of talking about his contract, just get it done.

All in all a huge three points for Liverpool and one we will hopefully look back on with fondness. Not pretty, not enjoyable for parts but we got the job done. That is all that counts.

Didn’t have loads to do. Not sure if he misjudged something in the first half, or if he slipped, or if he just got bored and wanted to make sure we were all awake.

Again always bombing forward, making himself an option and defensively, brilliant. Villa looked pretty happy to push us out wide and let us lob balls into the box today. A dangerous game when Trent is the opponent, he creativity is unrivalled.

Honestly, what is the point of trying to play football against this fella? Won everything in the air, battled hard and when he did make a mistake he just took a booking for it! In awe of his passing still, he just effortlessly pings it about 70 yards to the right every single game.

One day this man will go on a run, go past five played and blam it into the top bin. Until then he can continue to get forward as and when he likes and provide for others. Defensively, brilliant. Just like he always is. Gave a bit to Ashley Young too. Points for that.

I love him, I adore him. He’s exceptional. Was consistently an option and the only thing that was missing was the final ball, but that wasn’t really on him. Be boss if he backed himself to shoot as well! Look at the state of his heat map! 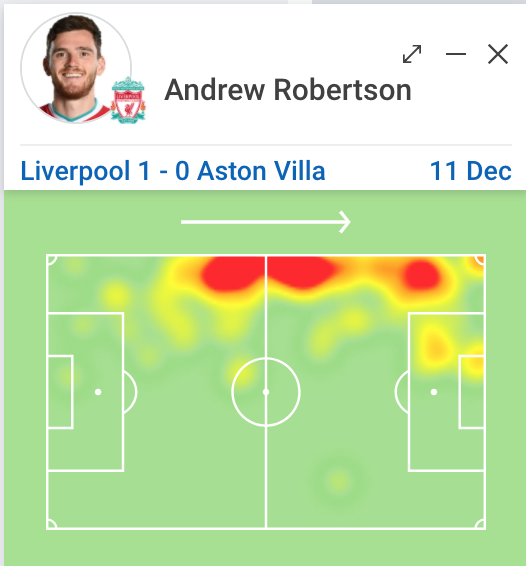 Potential MOTM shout for Fab today. That was a gritty, physical game and we needed Fab to stand up to it all, and he did. Won 5 of 6 aerial duels and was constantly putting out fires. A proper unit in the middle of the park.

A much quieter game for Thiago today, he was unable to influence the game as much as he has recently. Some lovely, eye-catching passes putting us on the front foot and providing Robbo and Mané with key passes.

Each and everyday in December leading up to, and including Christmas Day, we will be giving away prizes daily to our Club Legend subscribers!

When he retires from football he may as well open up his own laundry service. I think my trousers are the only thing on this planet that he hasn’t pressed. Bundles of energy, agression and fighting for his team each and every time the ref made an absolute ar*e of things.

What nerves of steel this man has. He scores loads of goals but the variation in his goals isn’t spoken about enough. Mings is clearly a super fan as he wanted a piggy back from Mo but you can’t do that. Really impressed with Mo’s defensive contributions too. No messing about from him today, he’s in it to win it, and he’s in to win it with everyone.

Tell you what, he doesn’t half get a rough ride sometimes you know. He’s a defenders nightmare. Robbo will get the praise for the positions he picked up but Mané is the man who creates that space, the decoy and often the man who supplies him.

Never ideal playing him in the 9, and to be fair he’s just been asked to do a job, which isn’t his position so I have a little understanding on his part. Had one 25 yarder which was over and little involvement besides that.

Had plenty of chances to score but they were either hard lines or poor finishing, and to be fair to him, he hadn’t trained all week. He was clearly the ‘break glass’ option as Ox in the 9 wasn’t working.

Played less than ten. But I rate that first challenge!