Morning Reds! The international break is upon us which can only mean one thing – an in form Liverpool player is going to pick up an injury. Until then, we can look at more lighter news mainly regarding what’s happening once all the players are back at their clubs.

Despite his upcoming national team duties Gini Wijnaldum is already focusing on what lays ahead for Liverpool in the coming weeks, speaking to Liverpool’s official club website, the Dutchman knows that every player will be needed in order to negotiate these tricky fixtures saying “It’s going to be a really important period for us, not only because they’re big games, but also because we play a lot of games,”

“In these kinds of periods you need your whole squad.

“We know PSG are a good team. We played Napoli already in the pre-season and we won 5-0. But we still know they are a good team and there were situations in that game where there was stuff to deal with.”

Barring any international injuries, Liverpool look set to have a full strength squad barring the obvious omission of Oxlade-Chamberlain, Dejan Lovren will be returning after his stomach injury and Klopp has admitted Fabinho is ready to now play for Liverpool. With pretty much two games a week for the foreseeable future rotation will be key for Jurgen Klopp’s side.

A few days ago it seemed certain that Liverpool were finally getting rid of Lazar Markovic for good as he had his pick of two giant Belgian teams.

Unbelievably, the transfer broke down at the last minute and the story followed that it was due to personal terms; now the Serbian winger has spoken out against those rumours. 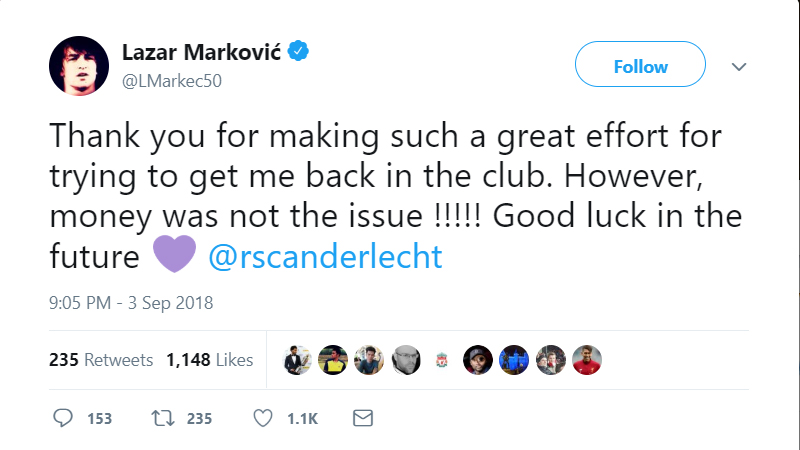 If it wasn’t due to the money then what could it be over? I’ve heard Belgium is lovely this time of year and he’ll certainly be getting more game time there than he would be at Liverpool.

Ah well, I look forward to occasionally seeing you on the training photos Lazar.

Yes we know this news broke early last night but its announcement has once again split the fanbase, Henderson didn’t have the best of games against Leicester at the weekend but that doesn’t mean he doesn’t deserve the contract.

Jurgen Klopp put it best, saying “Jordan embodies entirely what it means to be a Liverpool player in this modern era of football.”

There can be no higher praise from the boss and Henderson just gets what it means to be a Liverpool player, saying “There is no other place in the world I would rather play football. I want to be here for as long as I can be.”

If Henderson fulfils the new contract then that will see him still at the club by the time he is 33, whilst he probably won’t be featuring as much at that age; his influence behind the scenes will be vital for the club.