Excitement around the city is building as Champions League football returns for the campaign, as Liverpool take on Italian heavyweights AC Milan in this Group B opener. Astonishingly, this is just the third encounter between two of Europe’s biggest clubs, with both other matches being in Champions League finals.

More recently, a 2-1 defeat in Athens in 2007, as well as Istanbul 2005, the greatest night in the history of Liverpool.

Since winning the greatest prize available in club football on Greek soil against Benitez’ Liverpool, Milan have stuttered massively, fluttering in and out of Europe and suffering heavily from financial indecision. It is only recently that they have regained their mojo as a club. The size and prestige of AC Milan has never been doubted, but with the likes of Atalanta and Lazio seemingly moving ahead of I Rossoneri, they simply were labelled as a sleeping giant. Last season, they finished 2nd in Serie A behind fiercest rivals Inter, however this meant qualification for the Champions League for the first time in 7 years.

Skipping forward to how they are currently doing ahead of this massive affair against Liverpool, Milan go into the match on great form, rejuvenated by the return of Zlatan Ibrahimovic. After suffering a serious knee injury just three months ago, the distinctive figure of Ibrahimovic returned to action on the weekend, scoring the second in a 2-0 win against Lazio at the San Siro. The win rose Milan to second in the table, with an 100% record in Italy thus far.

In Ibrahimovic’s absence, both Rafael Leao and Ante Rebic have performed at a high level, interchanging positions in what has been a very fluid attacking system. Manager Stefano Pioli has deployed a 4-2-3-1 formation mostly under his reign, with a double pivot in front of the defence giving the likes of Diaz, Rebic and Saelemaekers the freedom to attack.

Frank Kessie and Sandro Tonali have been so essential to that pivot spoken about, covering the full-backs as well who love to bomb on. Tonali picked up a knock in the win against Lazio though, and with an important match against Juventus on the horizon after this, it is likely that he won’t be risked. Ismael Bennacer is a trusted replacement and will most likely cover Tonali for this one, partnering Kessie in midfield. Although this midfield combination has been so successful for Milan, it cannot be argued that former Chelsea player Fikayo Tomori has been a revelation since joining the club.

With undoubted talent for some reason Tomori was out of favour at Chelsea, featuring very scarcely under Frank Lampard. After a successful loan spell he signed for £27 million in what looks like a shrewd piece of business. It is a testament to the young central defender that he keeps out one of Simon Kjaer (captain of Danish national team) or Alessio Romagnoli (captain of Milan). For this match, I think Pioli will lean towards Kjaer to partner Tomori. His experience in big games, most notably in Denmark’s excellent European Championship campaign, is bound to give Tomori confidence and spread control throughout the side.

Going forward, Milan have several options to call on for their trip to Anfield. Depending on Piolo’s approach to the game, he has versatile and talented players in wide areas and behind the striker, crucial depth in what will be a congested campaign.

As mentioned, Milan travel to Juventus on Sunday so although he will have one eye on that, it will be fascinating to see who he opts for. On the weekend, right back Florenzi, formerly of PSG, was deployed in a right-midfield position, however I think for this game the manager will go for Saelemaekers, a young Belgian international with real raw potential and speed. Partnered with Brahim Diaz, the pair bring a youthful exuberance to the Milan set up as well as a dynamism that can really hurt Liverpool. Having fast players in and around Ibrahimovic is a tactic that can breed genuine success, the great Swede is one of the elite hold up strikers, and it is crucial that Van Dijk and co are able to stop the balls into him as much as possible.

Milan are a much different prospect to those faced in the Premier League for Liverpool, and this will be an incredibly tough battle. With quality scattered all over the pitch, a physical battle will have to be overcome if the reds’ are to open their Group Stage campaign with three points. The match will be the first European night with a full crowd for 18 months, and a plethora of noise will undoubtedly welcome these two heavyweights onto the field. 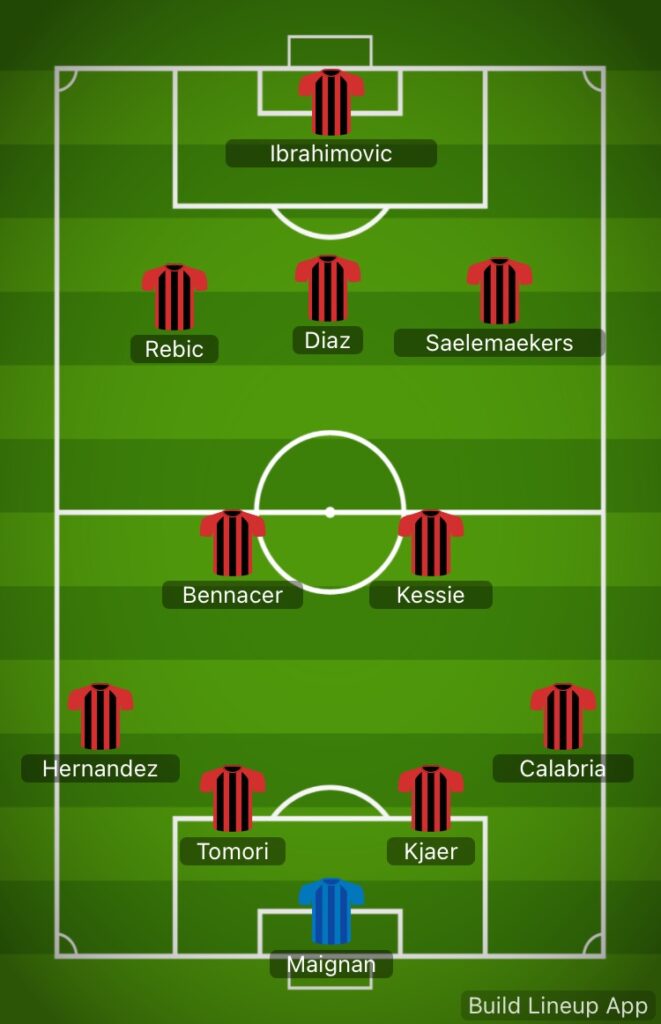