Liverpool v Arsenal | How should Liverpool line up?

Arsenal are up next for the Reds after the social media outrage over rumours that Jurgen Klopp had ordered some false positive covid-19 tests because we were scared to play against the Gunners – who then lost to Nottingham Forest.

Mohamed Salah and Sadio Mane got through their first AFCON games this week which means we’re one step closer to having them back, but, for now, the Reds must grind through the January games – first with one that could result in a trip to Wembley.

The Reds received a boost from news that Alisson and Trent Alexander-Arnold were back in training this week – and therefore should be available for the league cup clash against Arsenal. 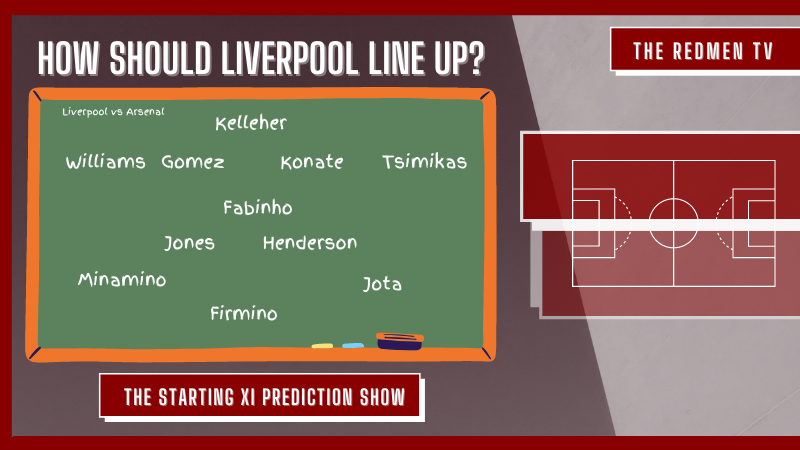 Kelleher remains in goal to continue his run in the league cup after his heroics in the penalty shootout during the last round. Neco Williams should keep his place with Kostas Tsimikas on the opposite flank: the reports are that Robertson picked up just a knock against Shrewsbury, but we may as well save him for the game at the weekend against Brentford. Joe Gomez should start in the heart of defence alongside Ibrahima Konate – the same pairing that was solid in the second half against Leicester City.

Thiago is set to be out for a little bit longer so we won’t have him available, but I think the Reds should go a little bit stronger in midfield here, so Fabinho starts behind Curtis Jones and Jordan Henderson.

Upfront Jota moves out to the left flank with Firmino central, while Takumi Minamino moves to the right in a position he played often with RB Salzburg. It would be unsurprising to see Kaide Gordon at some point after his impressive display against Shrewsbury, but we need to make sure that we gain a good advantage from the first leg at Anfield.

The Reds should have enough to get the win on Thursday night, but that could depend on how serious Mikel Arteta and Arsenal are taking the competition.