Liverpool come up against newly promoted side Norwich in their first game of the season in the Premier League, a side who have just come off a 94 pts championship winning campaign. Their transfer window, like ours, has been a quiet one having only spent £1.4million so no new signings that could cause us danger, only the players who managed to score 93 goals in a 46-game Championship season. Although they have signed Ibrahim Amadou who became their fifth signing of the summer, joining on a season-long loan deal from Sevilla.

This team contains a familiar face with ex-Newcastle goalkeeper Tim Krul between the sticks, a man who committed 11 years of his professional career at Thyme side before leaving in 2017 to further his career elsewhere and has since found himself back in the top tier of English football.

However, only managing to achieve 13 clean sheets in 46 games last season has since caused Norwich to loan in 30-year-old Schalke 04 keeper Ralf Fährmann in the hope that he could help them stay up by making those crucial saves when called upon. It would be hard to guess who will start in goal for Norwich as in pre-season these 2 have been rotating as number 1s, but if I had to guess it would be Krul in net for this game.

Another way in which this Norwich side are similar to the reds is that they have attacking full-backs with youngster Max Aarons managing 6 assists last season and, on the other side of the defence, Jamal Lewis managing to achieve 4 assists. The 2 centre-halves that are most likely going to play are Ben Godfrey and their captain Grant Hanley. This was the back 4 that started vs Toulouse in their 1-0 win during pre-season and their game vs Schalke 04 and seems to be their ideal backline.

Norwich have played a mixture between a 4-1-4-1 and a 4-2-3-1 throughout the pre-season so you would assume that they could play the latter as it will offer more defensive support for them against us.

The midfield contains an Argentinian named Emi Buendia who provided Norwich with 12 assists last season and could be a potential danger to our defence and a way for them to potentially get past our backline.

On Norwich’s left hand-side is Onel Hernandez who seems to be a threat as well with 19 goal contributions in all competitions, he could be quite a handful for Trent on Friday night with the pace and the skills to beat a man.

Norwich have one key man firing in the goals for them, and with a total of 39 goal contributions in last season alone, Teemu Pukki is going to be definitely one to watch over the upcoming season and especially one to watch for our defence in this game. He’ll want to pick up where he left off last, one for the fantasy teams… However, according to Norwich sources the prolific goal scorer hasn’t had an amazing pre-season so it will be interesting to see how he gets on at Anfield.

Our last 3 games against Canaries were: 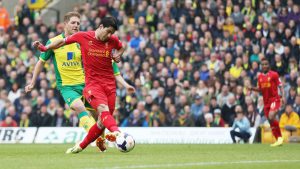