Not many could have imagined how emphatic Liverpool’s comeback season would be after the injuries last season, but Jurgen Klopp has done it again; the Reds are now in the 3rd Champions League final of his tenure.

This time around it’s a rematch from the 2018 final in Kyiv, a game where the disappointment of defeat became a turning point in evolving a Liverpool squad that had faced years away from the peak of European football.

Just one match remains of a campaign that has been Klopp’s most memorable yet. Five minutes of madness saw hopes of a quadruple-decider in Paris slip away, but any shortcomings in the Premier League will do little to taint a Liverpool squad that has become iconic.

Reassuring news on Wednesday showed Fabinho back in full training. The Brazilian is expected to start in a match where his presence will be vital. For Thiago, there seems to be a degree of promise over his status. His injury isn’t as bad as initially feared, and he was reported to have undergone light training this week. 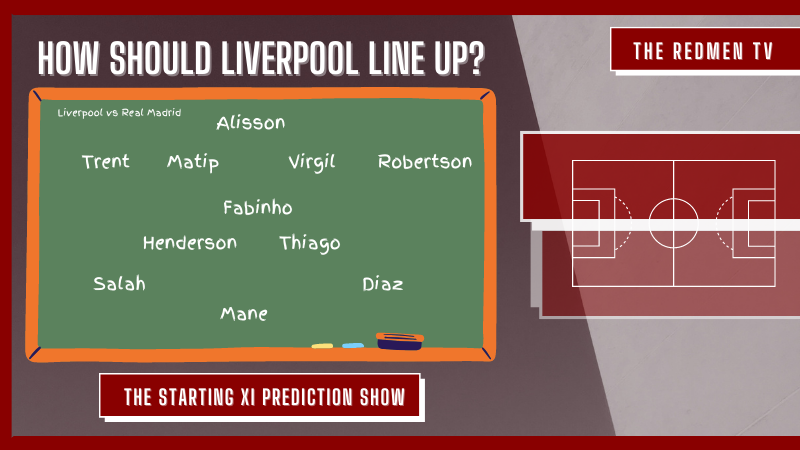 Alisson starts in goal after a season that might be his most impressive in a Liverpool shirt.

The only selection headache for Klopp in regards to the defence is who starts alongside Virgil van Dijk. It’s a difficult one; Ibrahima Konate provides the pace to help counter against one of Real Madrid’s most dangerous threat in Vinicius Jr, but Matip might be better suited to dealing with the intelligent movement of Karim Benzema.

Few would be disappointed to see either one play, but I’m going with Matip. I do think Klopp will go with Konate here, but I think Matip’s experience and ability on the ball might be a better fit for a Real Madrid side who will be looking to capitalise on mistakes – Matip seems to make less overall, and he is certainly better on the ball.

Fabinho starts in the six in an area of the pitch where the game will most likely be won. There’s no denying the technical ability of the likes of Toni Kroos and Luka Modric, but they will be yet to face a side as intense as this Liverpool team. With an eye on nullifying an area of strength for Carlo Ancelotti’s side, Thiago starts. He might not be 100%, but Liverpool need to get this game won in 90 minutes. The longer the game goes on, the more likely the La Liga champions will find a moment to take advantage.

Naby Keita, Jordan Henderson and Curtis Jones are all potential options as the final spot in midfield, and I’m going with the captain. Henderson’s influence in the middle of the pitch is vital in helping trigger the press and in organising defensive phases –  I think he’s the better fit for balance in the midfield when coming up against a strong side.

Upfront will see at least two players disappointed. The in form man at the moment is Luis Diaz, and the Colombian has already proven he can deliver in the big games after excellent displays in both domestic cup finals. On the right flank is, of course, Mohamed Salah. The Egyptian king looks to be finding his form again in recent weeks, and that has come at the right time as he looks to avenge the defeat in 2018.

That leaves one position with three players who could all make a case to start. Roberto Firmino can maximise Klopp’s pressing approach while helping link play, while Diogo Jota is the central-man most likely to take a chance if it falls to him, but Sadio Mane offers a nice balance between them both. Like Diaz, Mane is a man for the big occasion – and he has looked a different player since being deployed as the centre-forward. Sadio starts – but Firmino and Jota could certainly play a part with five substitutes available.

While it would be best for everyone’s nerves to see Liverpool race out into a 3-0 lead, Real Madrid are likely to respect the threat of Liverpool by not playing too adventurous in the early stages of the game. Klopp’s attacking quality should be too much for them eventually – but the opening goal may come a little bit later than we’d like. Once the deadlock is broken, the Reds should be able to find at least one more to secure a 7th Champions League title.