Liverpool v Southampton | A Look At The Opponent

The games are starting to come thick and fast for Liverpool now and a week of home matches will finish with the visit of Southampton, a game in which The Reds will hope that three points are a given prior to Manchester City and Chelsea’s difficult fixtures on the Sunday.

Quietly, Southampton have had an impressive season so far despite a few terrible results, establishing a settled team and inter-grating some excellent new players into the fray. Defensively, they have the joint fifth best record in the league, knowing how to keep sides at bay.

The additions of Valentino Livramento, Armando Broja and Adam Armstrong in addition to the breakout of Mohamed Salisu have added some real quality to the Southampton side. Ralph Hassenhuttl has had a mixed time to his tenure at St Mary’s, with undoubted periods of quality as well as some real lows.

Despite the recent 2-1 defeat at Norwich, it seems that there is much more consistency in their performances now and there is a certain level which they can set as the barrier, playing with temper, end-product and grit. Sitting 13th in the table, they are still only 5 points clear of the relegation zone, but the mood around the club has undoubtedly improved as of late.

CHECK OUT OUR OPPOSITION PREVIEW WITH LUKE OSMAN

Get yourself a FREE MONTH OF REDMEN PLUS! 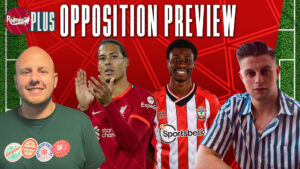 Some key players to look out for in the Southampton side ahead of their Anfield encounter are Livramento and Che Adams.

Firstly, the former is a 19-year-old full-back who was picked up from Chelsea in the summer. The energetic defender was highly thought of at Cobham but seeked a move away in an attempt at more first-team football. Since making his debut, he hasn’t looked back and has been one to watch in the Premier League this season.

A constant threat down the right hand side, Livramento’s energy is terrific and he doesn’t stop sprinting, giving his all whilst adding some real quality to the set up. Up against an experienced campaigner in Sadio Mane, Livramento will definitely have his boots full on the weekend but it is a great test for him as an exciting developing talent.

At the other end of the pitch, Che Adams has been in great form for club and country as of late, scoring 6 in his previous 5 games. Struggling for goals in his first season, Adams was written off by many across the league but his perseverance never dropped and now he’s reaping the rewards. In theme with the majority of Saints’ players, Adams works his socks off and has started to add some real quality to his final product.

At this level, sometimes you only get one chance and the Scottish international is starting to prove that when given a clear sight of goal, he will take it. Saturday’s challenge up against Van Dijk will be a tough one for the former Birmingham man, but with his confidence and swagger in front of goal, Liverpool need to keep close tabs on him if they are to keep a 3rd successive clean sheet.

Overall, the feeling is that victory should be forthcoming here, but Southampton will thrive on the opportunity to cause an upset. They kept Manchester City out recently, and even more impressively Guardiola’s side only had one shot on target that day. Playing with intensity and sharpness from minute one will be essential for Liverpool as this will certainly be no walk in the park.