Tottenham finished fourth in the Premier League this season, finishing one point above North London rivals Arsenal on 71 points with 23 wins, 2 draws and 13 defeats in the 38 game season. Spurs also got to the semi-final of the Carabao Cup where they were defeated by Chelsea on penalties. It’s been a pretty good season for the Mauricio Pochettino’s side who have also seen themselves reach their first ever European Cup final.

Tottenham’s road to the final wasn’t easy by any stretch. A group that included Barcelona, Inter Milan and PSV which, like Liverpool, Spurs waited till the final game of the group stage to confirm qualification for the knockout stages. Tottenham’s draw for the round of 16 saw them against Borussia Dortmund. In the first leg a tactical change by Mauricio Pochettino and a brilliant second half performance from Spurs, especially in the final ten minutes saw Tottenham Hotspur run out as 3-0 winners and in cruise control going to Germany in the second leg. In the second leg, Tottenham knew that a resolute defensive performance and an away goal would most likely be enough to see the North London side through to the quarter-final. After being defensively sound in the first half and ensuring the score line was 0-0 at halftime, Harry Kane struck three minutes after the break meaning Dortmund would need five gals to go through, but the German giants couldn’t manage a single goal against Pochettino’s men and Tottenham won 4-0 on aggregate.

Next up for Tottenham was an all English draw against City in the Champions League quarter final and Spurs would play their first Champions League game at their new stadium. Another 1-0 win for the North London side as Son got the winner for Tottenham and Lloris was the hero saving a Sergio Aguero penalty. The second leg was full of entertainment and controversy with Tottenham eventually winning on away goals after Raheem Sterling had a late goal ruled out by VAR.

Tottenham would now face Ajax who had been on superb form in the competition and had knocked out both Real Madrid and Juventus. A Donny Van De Beek goal was enough to see Tottenham lose 1-0 at the new White Hart Lane and meant they had it all to do in Amsterdam. Matthijs De Ligt struck for Ajax inside the first 5 minutes and Ziyech put Ajax in firm control of the game before the break. Tottenham though would have been boosted by Liverpool’s comeback against Barcelona the night before, and an incredible Lucas Moura hat-trick saw that Tottenham would join the Reds in Madrid with another win on away goals.

Tottenham’s expectation would never be to have got anywhere near the final but they find themselves there. The Reds must not underestimate Spurs as in an all English final anything can happen and with the three week break since the end of the season, Tottenham have got a lot of their injured stars back.

This is how I expect Tottenham to line-up on Saturday… 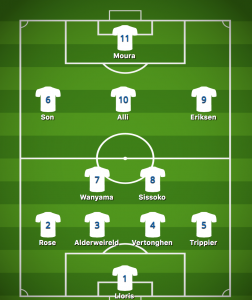 Liverpool have faced Tottenham twice this season and been victorious on both occasions but it’s a Champions League final and the Reds have a lot more to lose than Tottenham especially after the nightmare in Kiev last year.

COME ON YOU REDS!

Chris sat down with Flav to talk through the Champions League final and how he thinks Tottenham Hotspur will likely face this final and what chance he thinks the London side will have against Liverpool!