Liverpool v Wolves | How Should Liverpool Line Up?

The final day of the season will see the Premier League trophy on-hand at Anfield, but whether the Reds lift it will depend on if Steven Gerrard’s Aston Villa can pull off a result against Manchester City.

The Reds need to score early in this one to create anxiety over in Manchester, while for Villa it will be about stopping Pep Guardiola’s side from garnering momentum with their ability to start fast and put games away by half time.

Klopp’s mentality monsters have been through these situations before and should be able to acquire three points, but  regardless of the outcome, recent news that Klopp will remain at Anfield until 2026 means Liverpool won’t be going away any time soon. It’s been a fantastic season, but only the beginning of Klopp’s new era. 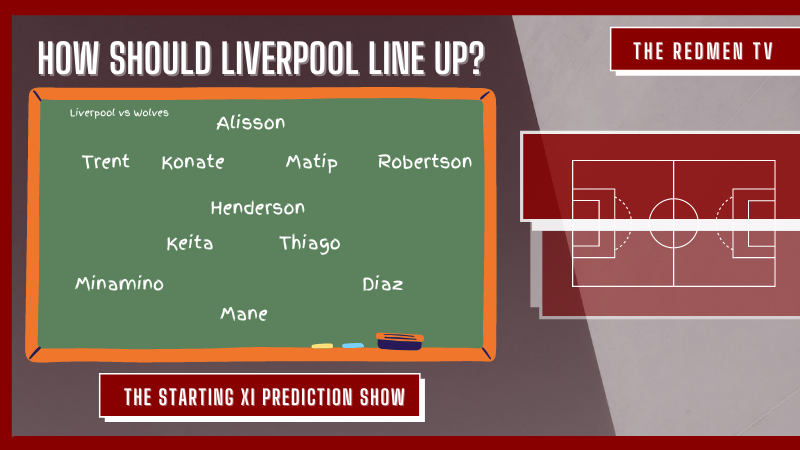 Trent Alexander-Arnold and Andy Robertson come into a defence that might be otherwise unchanged from the win at Southampton. Klopp didn’t seem 100% over whether Virgil would be fit, but Ibrahima Konate and Joel Matip’s performance at St. Mary’s Stadium showed the Reds are in good shape.

Jordan Henderson starts in the six behind Thiago and Naby Keita. Curtis Jones was excellent against the Saints, but I think Klopp can go for Liverpool’s most aggressive attacking midfield in the clash against Wolves. Fabinho is expected to be back for the Champions League.

Luis Diaz and Sadio Mane return in a line up that might be without Mohamed Salah. If Salah isn’t 100%, there’s no point in risking the Egyptian king before the Champions League final. Takumi Minamino earns a start on the right flank after his display against Southampton, with Jota able to come on from the bench in any of the positions on the forward line.

Wolves have secured a top half finish this season and can’t catch West Ham who will contest with Manchester United over who takes the Europa League and Conference League spots. That means it’s a matter of Liverpool putting in a solid display to ensure the three points. The rest is up to the club’s most iconic number eight of all time.