Two games into the new Premier League season and just the 2 teams have an 100% winning record, you guessed it, Liverpool and Arsenal. After spending over £130 million in the recent transfer window, Unai Emery will hope that he can assemble an Arsenal side ready to compete at the highest level. A trip to Anfield is certainly bound to be a test for his newly-looked side, and here is how I think the Gunners will line up this Saturday evening:

GK- Bernd Leno- standard really. Leno was impressive in his first-season at the Emirates and has provided consistency within the Arsenal goal. Conceding just the 1 in goal in their opening 2 Premier League games, Leno has been relatively un-tested, although you would think that Saturday’s encounter is bound to test the German international.

RB- Ainsley Maitland-Niles – the man who put the Gunners in front at Anfield last season. A product of Arsenal’s youth academy, Maitland-Niles is a player with vast amounts of potential, and despite not being a right-back at trade, he has covered for the stricken Hector Bellerin valiantly. Similarly to Leno, the likes of Miguel Almiron and Dwight McNeil haven’t tested Maitland-Niles out much this season, however when he comes up against Sadio Mane I’m sure we will see how good this young man really is.

CB- David Luiz- signing from London rivals Chelsea on Deadline Day rather surprisingly, David Luiz is a centre-half who’ll split opinions wherever he goes. Despite a tendency to portray lapses of concentration in games, Luiz is a player with plenty of experience and a passing range that undoubtedly suits Unai Emery’s philosophy. Luiz made his debut against Burnley alongside Sokratis and I suspect that this’ll be a partnership which Emery sticks with throughout the entirety of the campaign. Although there may be centre-backs within the club with individual attributes better than Luiz, his leadership and previously mentioned experience will not go a miss at Arsenal. For Emery and the Arsenal faithful, the only concern may be Luiz often being a defensive liability, going missing in key-games etc. Saturday will be a huge game for David Luiz and the Arsenal defence.

CB- Sokratis- Arsenal’s best central-defender in my opinion. The Greek international is incredibly strong and difficult to get past, however similarly to Luiz, has the tendency to be a liability within games. Sokratis also has vast amounts of experience, which if can be used to his advantage will be hugely influential for Arsenal.

LB- Nacho Monreal (C)- Monreal is another player at Arsenal that splits opinions, perhaps rather unfairly for a man who is usually consistent at the back. Nonetheless, it is arguable that fellow left-back at the club Sead Kolasinac is better than Monreal and potentially in line for a start soon, despite the issues with his safety after an attack on him and Mesut Ozil during pre-season. If Monreal does start, he will captain the side, a leader amongst the ranks but someone who will have to be on their game against the lively Mohamed Salah.

CDM- Granit Xhaka- if Xhaka is fit, he will start the game in my view. Against a side of Liverpool’s calibre, someone with defensive toughness such as Xhaka will be required to stifle the Reds’ energetic midfield. Deploying a 4-2-3-1 formation this season, Emery will opt for 2 of Xhaka, Willock Guendouzi and Torreira and I feel as if Xhaka’s qualities are more suited to this game that Guendouzi who I feel will drop to the bench. 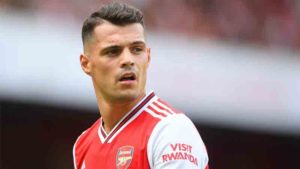 CDM- Joe Willock- undoubtedly one of the hidden gems of this Premier League season so far. Willock has settled into this Arsenal team comfortably after making the step up from the academy, with 2 very bright performances thus far. His ball retention and bravery within the midfield has been admirable for a man, or should I say, boy, with little experience in the Premier League. The reason I think Emery will opt for Willock as opposed to Guendouzi is because watching Arsenal’s game against Burnley, Guendouzi’s passing was slightly hesitant and delayed, factors that simply can’t happen at Anfield. Take last season’s 5-1 defeat last season. Torreira takes too long on the ball, Firmino pounces and scores. Emery will not want to be caught out by a high- tempo Liverpool side and therefore moving the ball quickly in the midfield is a necessity.

CAM- Dani Ceballos- this lad looks superb. Described by Martin Keown as the all round perfect midfielder, Ceballos shone on his full-debut at Arsenal, picking up the MOTM award with 2 assists and an exuberant display to say the least. His ability to find Aubameyang or Lacazette with a range of passes was noticeable, and the Spaniard on loan from Real Madrid is most definitely destined for big things in his career.

RW- Nicolas Pepe- £72 million man Pepe is surely destined for a start soon, after making 2 substitute appearances thus far in his Arsenal career. Pepe looked sharp when he came on against Burnley and against a side of Liverpool’s quality, the Ivorian definitely has the ability to produce something special at Anfield. Reiss Nelson would be the man for him to replace, and although it would seem harsh to drop Nelson after just 2 games, having him and Willock in the starting XI would be a huge risk against a side who have the ability to run riot within games.

LW- Pierre-Emerick Aubameyang- despite not being his favoured position, Emery doesn’t like playing 2 up-front and dropping either Aubameyang or Lacazette would be unthinkable. Aubameyang was the joint top-scorer in the Premier League last season alongside Mane and Salah and has picked up this season where he left off, scoring 2 in 2 games. Although he is 30, his pace is still frightening and his knack of finding the back of the net puts him up there amongst the elite forwards. A player Liverpool certainly need to be wary of.

ST- Alexandre Lacazette- one word which springs to mind for me about Lacazette’s ability is intelligent. Lacazette is highly admired at the Emirates and has led the line fantastically for the Gunners in recent seasons. He is a player with brilliant link-up and a devastating strike. Given the right service, Lacazette will undoubtedly score 20+ goals this season. In addition to this, the partnership he has formed with Aubameyang is one of the most feared within the Premier League. 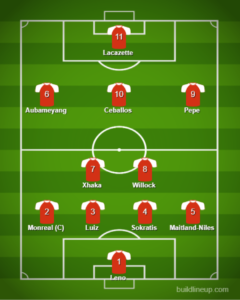 Arsenal at home is a game that has brought plenty of joy for Liverpool in recent seasons, but for me this’ll be a different game compared to times gone by. Prediction- Liverpool 1-0 Arsenal. For some reason, I just have a feeling that this will be a tight encounter, decided by a moment of quality or lapse of defensive concentration. What is your prediction?