Well, that was hard work! Liverpool keeps their lead at the top of the table after a hard fought win over Crystal Palace at home.

Not to be negative but that was a horrible game to watch, we definitely had shining moments throughout the game because we scored four goals but my god where we awful defensively today. To be honest of their feet whereas numb as mine I can feel for them but it’s like they didn’t know what to do with the ball.

James Milner is such an asset to our team and him being so versatile really helps us out but today just wasn’t his day. We know how our full-backs like to play, they love to go forward and create chances but up against Zaha today, Milner just couldn’t do that. He was getting caught out at times and the two fouls leading to his sending off were stupid ones to give away. 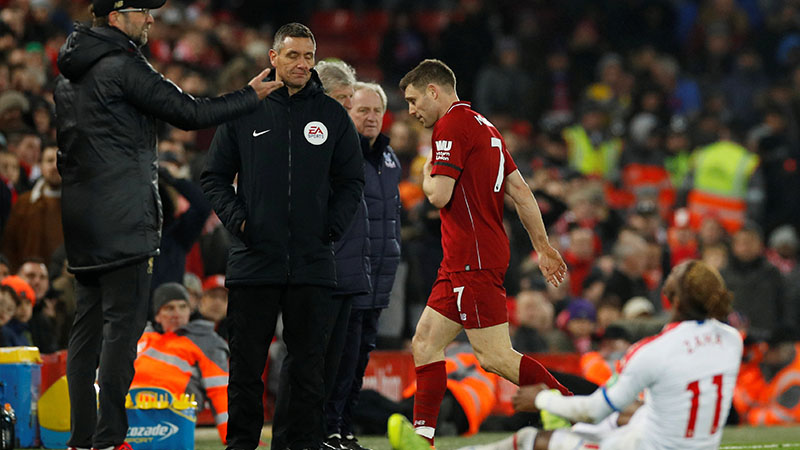 It’s lucky that we don’t have a lot of heavy fixtures coming up as with Trent being out injured and Gomez still a week or so away from being fully match fit, that red card could have proved costly for us.

It’s A No To Naby

I was all for Naby starting today’s match and was really hoping he could show us what he can do today but the game just seemed to pass him by and he was really struggling. I was surprised to see it come out at half-time but Klopp would have wanted to give him another go at it and he definitely would have had a few words for him at half-time.

He hasn’t had much game time this season and you can see that he isn’t quite ready to be starting Premier League games, fingers crossed he gets himself together and doesn’t let today’s performance knock his confidence because he can be a very influential player for us in the future.

We Got There In The End!

That was a very nervy last five minutes. I’m so used to us just battering teams so I didn’t like us being on the ropes towards the end but the most important thing is that we walked away with the three points.

The squad can have a nice break now and have time to reflect on the season so far and let them get their heads together to push on over these next few months.