1st vs 3rd in the Premier League this weekend as Liverpool take on Brendan Rodgers’ Leicester City at Anfield. The former Liverpool manager’s side have made a brilliant start to the campaign, scoring goals freely and keeping the joint-best defensive record alongside Saturday’s counterparts Liverpool. Last weekend saw them record an emphatic 5-0 victory against Newcastle United, a game that was dominated from start to finish and underlined the Foxes serious ambition to push on into the top 6 this season.

Since Rodgers entered the fray at the King Power Stadium, only Liverpool and Manchester City have picked up more points than Leicester, a stat which epitomises the flying form that they are in. The likes of Ricardo Pereira, James Maddison and Jamie Vardy have all made scintillating starts to the season, but more impressively, Leicester have quality all over the pitch and on the bench too. 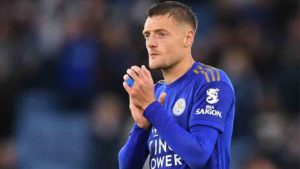 This season, they have operated with a 4-1-4-1 formation, with possession based incisive football the key to their success. Chelsea away on the second weekend of the season was a game that justified this, as Leicester struggled early on yet grew into the game and arguably should’ve picked up all 3 points on the day. Ever since that game, the Foxes have gone toe to toe with all of their performances, picking up just one defeat, a narrow 1-0 loss against Manchester United.

In addition to this, one of the biggest successes so far for Leicester this season has to be the impressive form of centre-back Caglar Soyuncu, the so-called Harry Maguire replacement who has stepped up admirably in the absence of the Englishman. At the time of his transfer, fans were waiting for a replacement, with Lewis Dunk and James Tarkowski being lined-up, yet when deadline day came and nobody had been snapped up, it was time for Soyuncu to show what he can deliver.

His strength and presence alongside Jonny Evans has been terrific, and having a good defence as well as a prolific attack are the bookmarks for what could potentially be a phenomenal season for Leicester. 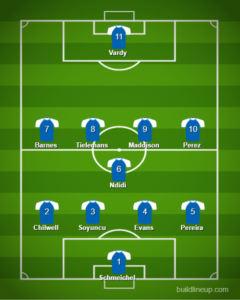 As mentioned, Leicester’s possession-based style has been superb throughout the season, predominantly down to the quality and balance of Wilfred Ndidi, James Maddison and Youri Tielemans, arguably one of the most well-rounded midfields in the league.

Not only do they provide defensive security, but fantastic supply for the forward players, predominantly Jamie Vardy who thrives upon the service over the top for him to latch upon. On Saturday, it will be interesting to see whether Leicester play with out and out wide men such as Marc Albrighton or more cautious players such as Dennis Praet.

One thing that is certain is that Leicester will give it a good go and not be afraid to play, as we saw in the 1-1 draw at Anfield last season, a game that some say cost Liverpool the title. It is important that Sadio Mane and Mohamed Salah track back the runs of Ricardo Pereira and Ben Chilwell, another big source of attacking potency. Overall, this will be a tough game for Liverpool but if we play to our strengths, I suspect we will have too much for the visitors.