With the International break reaching a conclusion, club football returns as Liverpool take on Newcastle United this Saturday at 12:30pm. The reds have made a flying start to the campaign, winning 4 out of 4, unlike their visitors Newcastle who come into the game in indifferent form. The Magpies have taken 4 points from their opening 4 games, with their solitary victory coming impressively away from against Tottenham Hotspur away.

Their performance at the Tottenham Hotspur stadium was undoubtedly the utopian vision for what Steve Bruce wants from his side consistently. Not only did they defend resolutely, but they broke well in numbers and looked potent in the final third, with new signing Joelinton opening his account with a well-taken finish past Hugo Lloris. Frustratingly for Bruce though, they were unable to build upon their win, drawing 1-1 at home against a Watford side in dire form. Although this wasn’t the worst result for the Geordies, games like that are what will make the difference for them in the long-term.

As mentioned, the game-plan against Spurs for Newcastle is one that Bruce will hope to operate in all of their away fixtures against sides technically better than them, taking minimal risks and hoping to catch out their opponents on the break or from a set-piece. He with operated a 5-2-2-1 formation within that game, one which allowed them to maintain a resolute shape defensively, as well as boasting a threatening proposition going forward.

Despite losing Allan Saint-Maximin to injury early on, his replacement Christian Atsu put in an astute shift and has impressed in the side since. Newcastle’s set-up allows wing backs to push on into dangerous positions, looking to put crosses into the box for Joelinton to attack. However, in a game of this difficulty, I suspect that those full-backs, likely to be Jetro Willems and Emile Krafth will operate as more defensive minded players, looking to double up on the likes of Mohamed Salah and Sadio Mane. 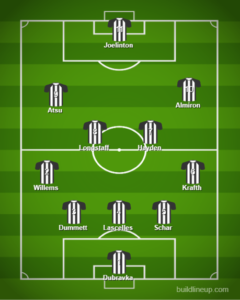 Newcastle’s danger man in my opinion is Miguel Almiron, a January recruitment from Atlanta United who has shown glimpses of his potential during his early tenure at St. James Park. Although he is yet to score or assist in a Black and White jersey, his willingness to run at players and draw defenders is noticeable, and I suspect that once Almiron gets off the mark for the Magpies, he will be an instant hit at the club. For Saturday’s encounter, it is important that Almiron stays close to Joelinton, preventing the Brazilian from becoming isolated within the affair. This would simply invite pressure from Liverpool, a trait that usually ends with utter domination from Klopp’s side.