After a fantastic win against Bristol last weekend, the Reds now turn their attention to this weekend’s fixture in the FA WSL, away to 4th place Birmingham City. 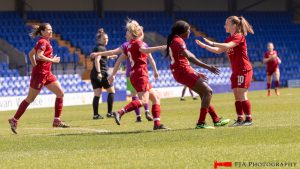 The last time these two teams met was back in November and ended in a 2-0 defeat to the Reds with an early goal from Follis and a late first half goal via Scofield. Birmingham come into this game off the back of 2 wins vs West Ham and Everton and will be looking for the three points to keep pressure on Chelsea who sit in third place. The Reds are fighting a different battle and are currently 8th on 19 points. 3 pts for Jepson’s side could propel them above 7th place West Ham who sit just 1 point ahead.

Top scorer Courtney Sweetman-Kirk will be looking for more goals to add to her tally of 9 league goals. Having not pocketed a goal last weekend during the 5-2 win vs Bristol she will be looking to strike again no doubt. Hot off the back of her hat trick last weekend and winning the FA WSL goal of the week, Rinsola Babajide will be looking to add to her tally of 5 goals so far this season. She’s caused a real threat since being given the responsibility as the true No.9, especially as she possesses such threat on the counter attack with not only her pace but her skill as well.

Looking at Birmingham’s threats, as of late Hayley Ladd has been scoring some absolute wonder goals this provides our midfield with a job of keeping her at bay. Joint top goal scorers for Birmingham are Ellen White and Emma Follis both on 4 goals this season, White being an England International and since coming back from injury has made a massive impact as a goal threat for City. Another England international in Lucy Staniforth is also a player to look out for, incredible set piece taker and is able to take a game by the scruff of the neck and make something happen from midfield.

A win against Birmingham could be Liverpool’s 7th win of the season and will make it 2 on the bounce and provides them with good momentum heading into the last game of the season; The Merseyside Derby!

All photos credit to: FJA Photography