Liverpool’s Best Team Since The Millennium

Liverpool has been home to some of the world’s best players over the years. From Ballon d’Or winners to legends who will undoubtedly be inducted into the Premier League’s Hall of Fame, who makes the Reds best XI since the millennium?

As in any XI, there will be some who narrowly miss out – we will add an honourable mention in for those who were considered.

The Brazilian who solved the Liverpool goalkeeping problem. Alisson could be Liverpool’s best goalkeeper of all time.

Riise and Aurelio come close but Robertson’s performances have been consistently solid since the Scotland captain made his debut for the Reds against Crystal Palace in 2017.

The £75 million fee was mocked by rival fans before Virgil quickly showed why he was worth every penny. A leader who improves those around him.

It’s difficult to split Liverpool’s best partnership of the naughties. Carragher and Hyypia dominated throughout the era, winning numerous trophies domestically and in Europe. Carra’s number of appearances (737) edge him into the side.

No questions here. Trent has been labelled as a generational talent for some, and his performances over the last two seasons show why he’s now regarded as one of the world’s best in his position.

Klopp has made many great signings during his tenure, but this is certainly one of the best.

Since scoring an emphatic solo goal at the Emirates, Mane hasn’t stopped producing in a Liverpool shirt. Not just that though, Sadio’s mentality is exemplary in big games – the Senegalese star embraces playing on the biggest stage where he has delivered when it matters most.

CM) Xabi Alonso Still can’t work out why the Reds tried to sign Gareth Barry when we had this man. Alonso was a key figure in all of the teams the Spaniard featured in, including; Real Madrid, Bayern Munich and the Spanish national team.

The captain. Liverpool’s current midfield crop is unfortunate to miss out – but not many clubs in world football can boast of such pairing which played together as the Reds took down one of the best AC Milan sides in history.

Liverpool fans tracked his plane as he flew into Melwood and Mo has produced ever since. The Egyptian King took the fewest games of any Liverpool player to score 50 Premier League goals and continues to play a significant role in Klopp’s side.

Forget silly stats like scoring against certain clubs, Luis Suarez – despite trying to leave the club on multiple occasions, was a unique player for the Reds who became one of the best strikers in the world after signing for the Reds. Norwich fans don’t miss his presence in the Premier League.

A Torres-Suarez partnership would have been unplayable – some claimed that the plan was to play the two upfront together before Torres headed to Stamford Bridge. But there is one player who the Uruguayan would have formed an even more lethal partnership with.

ST) Michael Owen No defender could cope with Owen’s pace and finishing ability. The Reds had Michael Owen at his best. The 2001 Ballon d’Or winner was unstoppable in a Liverpool shirt – if you didn’t get to see him, think of Sergio Aguero but quicker.

The 2001 FA Cup final, goals against Germany and Brazil for England, the list goes on. It’s difficult to think of a player who dominated on the world’s stage at such a young age – only Kylian Mbappe springs to mind.

Owen spoke on the Jamie Carragher podcast about how he tried to return to Liverpool after hearing Real Madrid wanted to sell him but couldn’t convince the Reds to match Newcastle’s £16 million bid.

Not many sides will be able to put together a team as impressive as this one since the turn of the millennium. Do you agree with this XI? Let us know if anyone has been missed out! 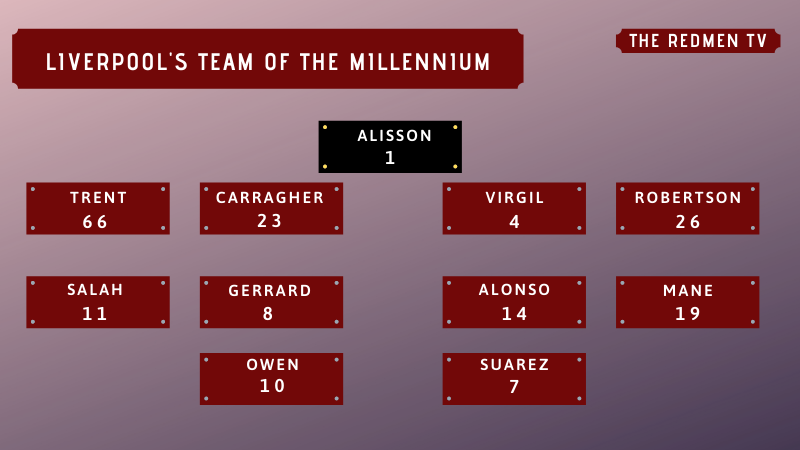