After suffering through the frustrating 90 minutes at Murrayfield on Sunday it will come as no surprise that the worried mutterings surrounding this Liverpool side have increased in volume.

The defensive frailties that were on show can be excused to the physical demands that are currently being placed upon this side in the hectic rush for fitness for the season. The inability of either Trent or Robertson to go both ways will not be there by the time the red men take the field at Anfield against Norwich.

However, the bluntness of the attack was a worrying sign. With the Ox and Gini starting for the second consecutive game alongside Origi in the front three, it is fair to speculate this will be the trio who will start at least the charity shield. The inability of any of the three to shine against an organised defence will only add fire to those calling for further recruitment in these areas. 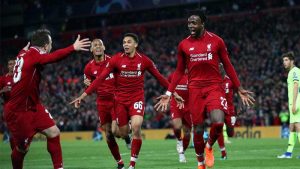 Up until this weekend, there have been few encouraging signs from the English press to suggest that any additional players will be brought in. Arsenal’s links to Nicolas Pepe destroyed the rumours that he was Anfield bound and rumours for Bordeux winger Francois Kamano have equally been shot down. Supporters are having to come to terms, some not doing this very well, that our transfer business will consist of a pair of untested teenagers. The only light for the fans clamouring for further reinforcements were the tweets of David Maddock’s that through a cat among the pigeons this weekend.

Maddock’s suggesting that a 1st team squad player could still come in, but with some provisos. That player would be.

This set Liverpool supporters rushing to football manager to scour the game for the top left-sided talent that Klopp could potentially bring in. Here at Redmen TV we like to help our followers out and have done some of that work for you. Here are three top talents that potentially fit the bill.

When looking for the next amazing Spanish talent you don’t normally think of looking at the Croatian league. However, potentially the brightest Spanish talent is currently plying his trade in Zargreb.

Dani Olmo isn’t the super star name that everyone is talking about, yet maybe they should be. The 21-year-old Spaniard took the unconventional risk of leaving Barcelona where he saw a lack of opportunity for himself and heading to Croatia. For a 16 years old without a word of Croatian and barely any English to do this speaks to his single-mindedness to succeed. Olmo has turned himself into the complete attacking player. Able to play on either wing or as a central midfielder, he offers goals and more importantly lots of assists. He is capable of dribbling at defenders or beating them with his quick passing. 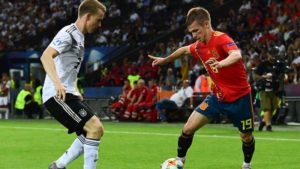 Olmo fits all the criteria Liverpool are looking for. He is comfortable playing on the left. He also has the flexibility to play centrally or from the right, where he mainly played for the Victoria’s Spanish U21 side at the resent European Championships. His price coming from the Croatian league would be a steal in the present market. However for a player who was willing to travel almost 1000 miles to develop his career, sitting on the bench may be something he is unwilling to do.

If I were to suggest that Liverpool should go after the wide forward from Ligue 1 who last season averaged more than a goal or assist every 100 minutes you would think I am speaking Nicolas Pepe and a 70m transfer.

However, in Cornet Lyon had a super-sub whose numbers were not just similar but actually better than Pepe’s. Both players averaged a goal contribution around every 100 minutes, Pepe just over, Cornet just under. What makes Cornet’s 12 goals and 5 assists for Lyon even more impressive is that not one of the goals came from the penalty spot. Whilst Pepe collected 9 of his 23 goals from 12 yards away. 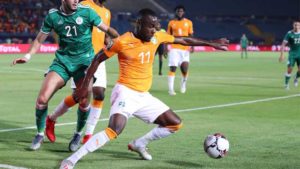 Cornet at 22 is already a powerful, fast forward who is equally adept on either wing and would bring physicality and size that the current wide forwards at Liverpool lack. His versatility and current role as a rotation player at Lyon would mean that he would be happy to have that role at Anfield and should ensure that the price it would take to get him would be reasonable. All of this sounds like Cornet is the perfect player. To be clear he is far from that right now. There is a reason that many of his performances this season cane from the sub bench. However, he is a player who is able to score goals and who at the backend of the season it all seemed to have clicked. Putting this raw material in the hands of Klopp offers the potential to create a future world-beater.

After securing his team mate, maybe a move for another youngster from Fulham would be a good move for the Redmen.

Sessegnon stellar rise to fame took a bit of a beating last year when exposed to the top defenders in the premier league. The expectation was so high for the young Englishman unless he had a stellar season for many he would have seemed tro disappoint.

Unsurprising to rational people the 18-year-old didn’t replicate the incredible numbers of goals and assists in the premier league that he was able to do in the championship. For a normal player, 2 goals and 6 assists would be an incredible return at 18 years of age in such a poor attacking side. However, the hype surrounding Sessegnon was so high that he was deemed a flop. 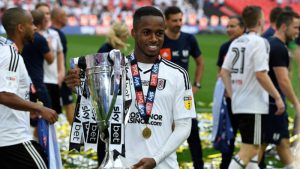 Tall, fast and with the ability to play both at full back and on the wing, Sessegnon would seem to fit the requirements almost perfectly. He would offer the flexibility desired and would be willing to bide his time and take a role on the bench, while developing under the tutelage or a top coach. The price may be a little high but Fulham’s relegation will have softened the blow a little. The toughest part of this potential transfer may be convincing Sessegnon to abandon his family and native London for Liverpool.