After a disappointing 3-0 loss in the semi-finals of the Champions League, Jurgen Klopp and his men will be looking to bounce back strong tonight as they travel to face ex Liverpool manager Rafa Benitez and his Newcastle men. With Man City not playing until Monday night, all Liverpool can do is get the three points and wait. Benitez will not make this game easy for his former side and will want to please the fans at Newcastle’s last home game of the season.

The last time Newcastle beat Liverpool was back in December 2015 in a 2-0 win at St James’ Park, since then The Magpies have gone on to draw two and lose two against Liverpool. When these two sides met earlier in the season Liverpool came out on top, as goals from Lovren, Salah, Shaqiri and Fabinho helped The Reds leave Anfield with all three points. Liverpool have lost 10 away Premier League games against Newcastle, only losing more against Spurs, Chelsea and Man United. As well as this, Newcastle have won their last four Premier League home matches in the month of May, conceding just one goal.

After picking up injuries recently, Jamaal Lascelles and Ayoze Perez have both passed fitness tests for the game tonight. Perez may be key for the Toon Army with the Spaniard scoring seven goals in his last seven games. Yedlin is set to miss the game tonight with a groin problem. Almiron, Longstaff and Lejeune are all injured as well.

Now onto my predicted line-up for the game. I think Benitez will start the game with his preferred 5-4-1 with wingbacks. I believe Dubravka will start in goal, in-front of him I think the defence will be Manquillo and Ritchie at wingback with Schar, Lascelles and Dummett all in the centre of defence. I believe the midfield will consist of Perez, Sung-Yueng Ki, Hayden and Atsu, this leaves Rondon to start at striker. 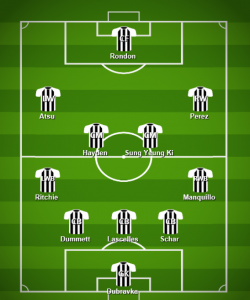 I think this game is extremely hard for Liverpool. With many of our first team having just played 90 minutes at the Camp Nou stamina may come into play in the later stages of the game. I think Rafa will come out wanting to win the game and nothing else. However, I believe Liverpool will slightly edge past Newcastle tonight and come out 2-1 winners with Salah and Henderson getting the goals for Liverpool.