Prodigy to Professional – The Emergence of Rhian Brewster

Born on the 1st of April 2000, one of Liverpool’s most promising Youth Academy stars was born, and his name is Rhian Brewster. He was first properly found after playing in a tournament for the Chadwell Heath and Shield Football academy. At this game there were a few scouts from teams across England but in the end he was picked up by Chelsea.

At the time Rhian already stood out from the crowd with coach Daniel Seymour who claiming that “he was scouted in the first two minutes of his first game after rounding the entire opposition, scoring and then grabbing the ball and putting it back on the spot” after the tournament mentioned earlier.

While at Chelsea Brewster was playing under Michael Beale, who would soon move to Liverpool as a coach of the U23s at Liverpool. When Beale arrived at Liverpool he mentioned Rhian Brewster’s name to the scouting staff at Melwood and they then went on to bring him to Merseyside. 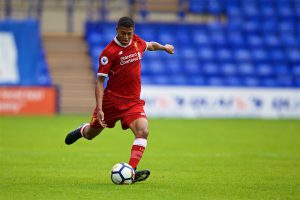 One of the main causes of Brewster’s eventual move to the reds would have been the influence of his dad who is a big Liverpool fan. Ian Brewster loved John Barnes so was really into the idea of his son potentially playing for Liverpool and becoming a legend just like Barnes.

Then, finally in 2014 aged 14 Rhian Brewster arrived in Kirkby to start his first training session with his new team. When Beale was asked in an interview about Brewster he exclaimed that “he is a very good prospect and one that will be exciting for the LFC fans”.

Not all of his sessions were in Kirkby (the youth academy), he was part of a group of players called the “talent group” in which the club tailor training sessions for them in order to help them prepare for the first team games. This group would travel weekly to Melwood to train with Pep Lijnders and the first team. Other things on the strikers training-programme included training sessions with ex-Liverpool and Real Madrid forward Steve McManaman in which they would look at ways to attack the ball from crosses and perfect finishing in different situations.

When Klopp became the Liverpool coach Brewster was immediately fast tracked to these sessions alongside the likes of Ben Woodburn and Trent Alexander-Arnold. This obviously shows that Klopp has an eye for a youth star as proven with Arnold and hopefully soon to be shown with Brewster.

After getting a few first team starts for the reds in 2016 and starting to play for the U23s in January 2017 he got the chance to play for the first team after being put on the bench on the 23rd of April 2017 in a Premier League match against Crystal Palace. He never got on in that game and is still yet to achieve a competitive first team appearance but all of this was enough for the England U17s coach Steve Cooper to call him up for the FIFA U17s World Cup 2017 as one of England’s starting players. 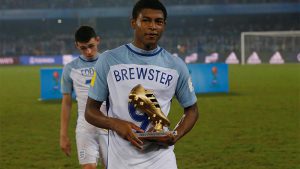 In the earlier stages of the tournament Brewster was quite quiet goals-wise and only pocketed one in the opening few games. It was in the big games that Rhian showed his true colours scoring 7 goals in 3 games, a hat trick in the Quarter-Final, a hat trick in the Semi-Final and scoring one goal in the final and going on to lift the cup itself with the team.

I’m sure we would’ve seen more of him over the past season if it wasn’t for his knee and ankle injuries that he suffered at the midway point of the 17/18 season in an aerial duel in a game against City. He required surgery on both injuries therefore meaning he had a lot of time spent on the sidelines.

But Jurgen Klopp’s intentions to get him playing first team football are obvious because as soon as Brewster returned back from injury he featured on the subs bench against Barcelona and Tottenham in the Champions League.

There is also the added element of Brewster conducting a number of interviews and appearing on the clubs marketing campaigns in recent months which suggests the club feel he is ready to step up to the pressures and responsibilities that come with being a Liverpool player.

Brewster is definitely going to be part of LFC’s future but now its just a case of when and how.

What do you think the fans can expect from him this season or do you think there is too much pressure and expectancy being put on his shoulders? Let us know in the comments below!