‘There’s something that The Kop want you to know.

The best in the world his name is Bobby Firmino’

It has become the soundtrack of Liverpool’s season; a relentless and unwavering earworm not unlike the infectious, all-encompassing brilliance of the man it adorns.

He is Bobby Firmino, an infusion of exuberance and flair synonymous with any Brazilian footballer.

He is selfish and yet selfless, always analysing the wider picture rather than sweeping up individual accolades.

The centre-piece to Klopp’s system, he seamlessly couples together defence, midfield and attack.

Firmino defies the archetypal image of what a No.9 does. 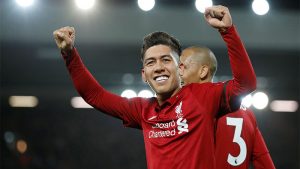 Instead, he is something else entirely; a player whose goal return is not ruthless but remains considerable having notched 68 goals in 198 games, but whose impact extends far beyond those numbers.

An all-round No.9 with the presence of mind and tenacious mentality to intertwine defending, creating and attacking in one, he represents so much more than just a forward.

Of the 444 goals Liverpool have scored in the current regime, Firmino has contributed to more than a quarter – 68 goals and 44 assists. He has created more chances than any of the front three since their partnership formed, while making more tackles than any forward in the Premier League since arriving from Hoffenheim in 2015. 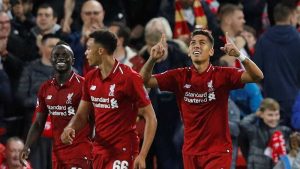 In effect, he has established a unique role for himself; a creator and enforcer at the epicentre of Klopp’s attacking blueprint.

The most fitting testament to his quality’s arcs back to May, where the 27-year-old was kept out of the starting line-up for the first-leg of the Champions League semi-final as The Reds fell to a 3-0 defeat at the Camp Nou.

In his absence, Gini Wijnaldum was shoehorned into an unfamiliar role, and while he produced a performance filled with endeavour, the difference was notable.

At half-time, he would turn to his teammate in both admiration and utter bewilderment: “What the heck are you doing in that position? It’s unbelievable! It’s so intense!”

That’s exactly what Firmino’s role is; an incredible, unwavering intensity that requires him to never stop moving, linking midfield to attack all while ensuring the ball ends up nestling in the back of the net.

Drifting in and out of position, pulling defenders out of theirs in doing so, he creates space for Salah and Mane, both of whom look far more potent when the Brazilian is the spearhead of the attack.

The opening games of this season have brought the very best of Firmino, with two goals and two assists in four Premier League games combined with two assists during a substitute appearance in the Super Cup that saw him alter the trajectory of the game entirely. 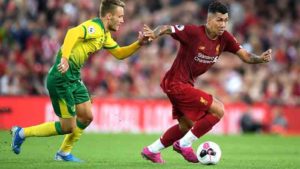 While the headlines spoke of Sadio Mane and Mohamed Salah’s so-called ‘feud’, it was the Brazilian who pulled the strings at Turf Moor as Liverpool strutted to a fourth consecutive win of the campaign.

Pursuing Burnley players as if his life depended on it, his insistent activity harassed them into mistakes, regaining possession before having the presence of mind to produce a quality ball, as seen in his pass for Mane’s goal.

In all that exuberant defensive work, his scoring instinct remained, emphatically striking the ball beyond Nick Pope for the third. In doing so, he became the first Brazilian to reach 50 Premier League goals.

Firmino has journeyed along with Liverpool, developing from a square peg in a round hole under Brendan Rodgers to the architect of Klopp’s ruthless, rampant Reds.

Showing strength, vision and technical ability, it’s hard to think of many others in the club’s history who have combined such depth in quality quite like him.

From an emphatic volley against Stoke to a bullish run and chip against City, to last season’s unstoppable solo run against Arsenal, to his trademark no-look finishes and spectacular celebrations, Firmino has lit up Anfield.

It’s only fitting that his name reverberates around The Kop with the same pompous electricity as his performances on the pitch.