JUDGEMENT; The ability to make considered decisions or come to sensible conclusions.

In a desperate attempt to create content I have decided to judge and rate the Liverpool players so far this season, which could turn out to be the actual season. I hope not.

The main problem with doing this is that one persons 6 out of 10 is another persons 8 out of ten. It’s a game of fine margins. I will do my best to explain my rationale behind the numbers and argue my points. If you choose to agree, thanks, if you choose to disagree, thanks.

I’m here for the conversation. Working from home can be a struggle. I’ve nailed down self-isolation from human beings. In fact, I’d mastered that a few years back. Or maybe they mastered me. Who knows. All I know now is I really need to start doing it with my fridge as well…..

Anyway, I’ll start with the goalkeepers.

I may as well start with Alisson. That’s why you came here. And he’s the absolute best.

You think this would be really easy to just give him a ten straight away and that’s him done. Probably, but lets take a closer look.

There are so many positive elements to his game. For a start he carries an aura, not just for us fans, but for his team mates.

I’m not going to throw anyone under the bus here but if you’d come off the back off that Final in Kiev you’d want some reassurance that even under mitigating circumstances, the boss would have your back. Yes you could argue that they’re team mates and they want to support each other but you can see the difference he makes. This season and last.

That aura, that confidence and calmness allows him to play his game, it allows us to admire it. If any goalkeeper at Liverpool in recent times tried half the stuff he did we’d have taken a few years off our lives!

Then there’s his distribution, his presence to opposing players, his phenomenal ability to control and win one on one situations, shot stopping, decision making, I could go on. All the things a goalkeeper should be dead good at and more.

Now I’m going to balance things out a little. This is not a criticism of Alisson and not something which he is at fault for but I think the discussion needs to be had. He’s missed quite a bit of football. And important games at that. Bowing out of the opening Premier League match v Norwich was a blow for all Liverpool fans and what seemed a disastrous start to the season. The aura had gone.

He missed the Super Cup, which we won, he missed two UCL group stage games, he missed the game v Atletico in which goalkeepers turned out to be the difference – more on that later. And he’s missed 9 Premier League games, 8 through injury, one through suspension. It could have been more had the season carried on like it would have if we didn’t have this current pandemic.

Again this is not a criticism of him, just merely making a point. He’s not at fault for the Champions League exit and he’s obviously not at fault for his injuries. But it is a concern, just like it is with any other player in the squad.

This might seem a little worse than it is given the fact he’s also ‘missed’  domestic cup games too, Adrian the ‘keeper for those as we are all well aware.

He’s racked up 28 appearances so far this season, conceding 17 and keeping 14 clean sheets in all comps. So that stats are pretty impressive. And so is he, the sexy bastard. Looks like something that has just dropped out of GQ magazine. Serenading us all with his guitar skills. Lovely.

There is absolutely no doubt in my mind that Alisson is the best goalkeeper to play for Liverpool in a very long time and there is a huge chance, if the season gets finished, he will be there playing, contributing further to our first Premier League title, our first league title in 30 years. And so he should be, for me he is the best in the world.

By far my favourite moment this season from Alisson, and there are many to choose from, is his assist for Mo Salah versus Manchester United to put the game to bed. Sums him up within seconds. Always thinking on the front foot, fantastic awareness and distribution and hungry for more. Many goalkeepers **COUGH** Ben Foster **COUGH** would have been on the floor time wasting, not Ali.

The season isn’t over and it’s been the best in my life time, so currently I’m going to give Alisson a 9/10. Which I know might seem baffling to some, but if you read the words above you will see my reasoning.

When we win the league everyone gets 10’s anyway.

Leave me your ratings in the comments below once you’ve read the others….. 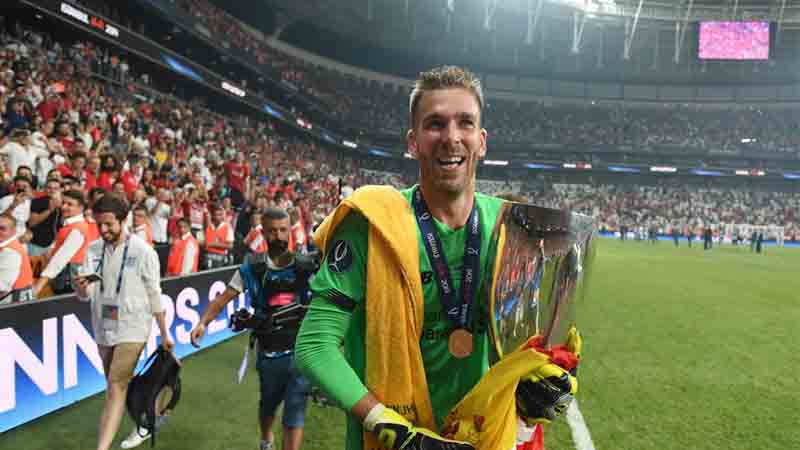 This is probably the hardest one out of the three for me. We as football fans, and I heavily include myself in this, are fickle. We have short memories, we tend to pick out or remember the negatives over the positives.

Maybe that’s subliminally entered our mechanics and ability to think for ourselves thanks to the cesspit that is social media. We often seek reassurance from journalists, peers and fellow fans to justify own way of thinking, our judgement. Sometimes they can  be overturned if the majority think the opposite.

There are conversations and reasonable debates to be had, not often, but they do happen.

This isn’t quite the case with Adrian at the moment. There hasn’t been two or three weeks of constant football to paper over the cracks in his performances of late. If anything, they’ve been exacerbated. Our last memories are his mistakes v Atletico, Bournemouth and Chelsea.

Making high profile errors don’t really help, being knocked out of competitions don’t either to be honest. There has to be someone to blame, a scapegoat. Unfortunately, it appears to be Adrian. It’s not solely his fault, of course it’s not. It’s a team game, to think other wise would be irrational but he did play a rather large part.

The other issue for Adrain, which is 100% not his fault. He’s not Alisson. But tell me this, how many Premier League no.1’s are like Alisson or as good as? Ederson? That’s probably about it. So why should we expect a no.2 to be flawless? Or has there been one too many errors from Adrian? And the type of errors? They aren’t ‘hard lines’, they are schoolboy errors. Did we all think that the Karius/Mignolet days were behind us?

He’s made a string of world class saves in his short time at Liverpool, he’s kept us in games, he’s arguably won us games too. Did any of us really expect that much of him when he came on against Norwich? Have we been spoilt with that run of form earlier on in the season? Was this recent form always on the cards? Or has his form, concentration and confidence just dropped? Are we being too harsh on him?

Or is he actually just not good enough?

I think you could argue the point for any of the above really, I suspect it’s a mixture of all of them.

It’s easy to lambast him now. But I think he also deserves a bit of credit for his earlier form I’ve already mentioned. Particularly in the Premier League.

And when I say credit, yes I’m aware he’s also made mistakes and conceded goals. 24 goals. In 18 appearances. Pretty alarming. Or is it?

In an ideal world we have a back up ‘keeper who just comes in, bosses it and then fucks off back to the bench and domestic cups. But I don’t think that’s the case with Adrian. And I don’t think it was ever going to be.

West Ham let him go for a start, so there should have always been question marks there. He’s never been bought by anyone. Like for actual money. Did we all depend on his experience in the Premier League? Was he ‘the best’ out there we could get? Is he just a short term fix? Was it better to get him than trust one of the youth players?

It is really difficult to buy a back up goalkeeper of his experience knowing they are going to be second fiddle to Alisson, those of you who have ventured back into Football Manager recently will know what I’m talking about.

I think he should be commended for knowing that. He seems a dead nice fella and well liked around the squad. Although you don’t employ someone for being a dead nice fella, there is still hard work to be done. And as I’ve mentioned, he’s not Alisson. Look at the drop off between Mo and Shaq, Mane and Origi, I could go on…

What ever you think of Adrian I think it important to put him into context. A second choice ‘keeper. Who just isn’t Alisson Becker.

There will be many who will argue less and suspect one or two who will suggest maybe I go a little higher. I’m fine with that. 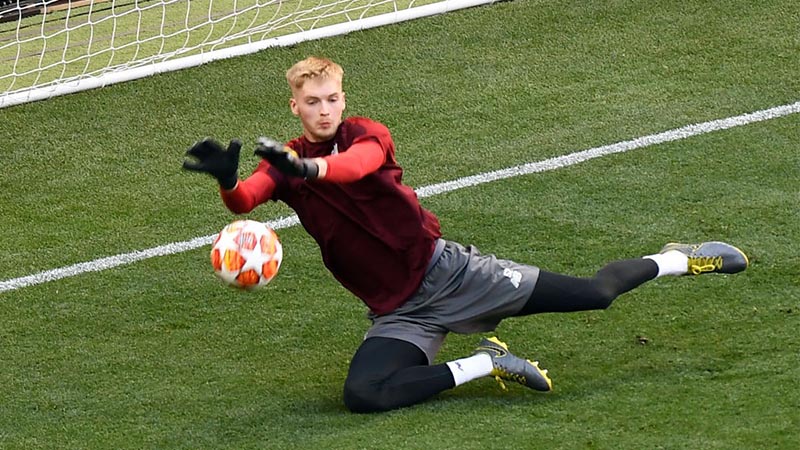 I’ll keep this one short and sweet because, well I have to.

Chances have come few and far between for 21-year-old Caoimhín Kelleher. But I still think he deserves a mention. He hasn’t been the shining light in the youth team like Neco Williams, Curtis Jones and Harvey Elliott, but I don’t expect that of him. And neither should you.

Kelleher is regarded very highly amongst his team mates, the Liverpool academy and supporters I have spoken to from Ireland. He’s a prospect, a man learning his trade and like Adrian before I think it’s important to remember this when judging him.

I’m only going to base this on FA Cup and Carabao Cup appearances because if I’m being brutally honest, that’s all I’ve seen of him.

The Arsenal game is the one that springs to mind. Which was just a mental game I think we can all agree. He made mistakes, of course he did. Wouldn’t you be shitting it if you had to play at Anfield in front of 54,000 people.

Not helped by being sold short by James Milner and others at times.

But you know what? He came through it. We talk so much about character in this current Liverpool side. I think it’s a fair argument to said Caoimhín Kelleher has it too.

He’s adding experience to his game, yes it might be little and often but he’s got that out the way. He’s got a Merseyside Derby under his belt. These all come into play later in his career.

Then there was the Aston Villa game. Admittedly I missed this on as I was in Qatar but from the highlight and goals I did see, his defence didn’t help him. Plus there was no pressure. Aston Villa are a Premier League side, you’d expect them to beat a youth team. Yes there was hope, but not expectancy.

As mentioned, I’m basing this ranking on what he is, a prospect. Which, in my opinion, a 5/10 is fair. Might seem harsh to some but my 5/10 is just sound. Nothing catastrophic, no heroics. It’s honestly not a criticism of the lad he’s got bags of potential and in Alisson Becker he is learning from the very best.

Happy to have a discussion on any of these. Points I’ve missed.

Or if you think I’m completely wide of the mark on any of them.