Southampton v Liverpool | How Should Liverpool Line Up?

A nail-biting win on penalties saw Liverpool win their second cup of the season, and after being rewarded with the bonus of West Ham’s efforts that has edged a path that leads back to the Premier League title, any plans that Klopp had to rest the entire XI could now be altered.

The race is back on, and it’s upto Liverpool to keep the pressure on until the final whistle. Steven Gerrard will be desperate to help play a part in the Reds winning the league, all Klopp can do is guide the way to another three points.

That said, a mixture of rotation while maintaining a strong squad is crucial to earning three points on Tuesday night. 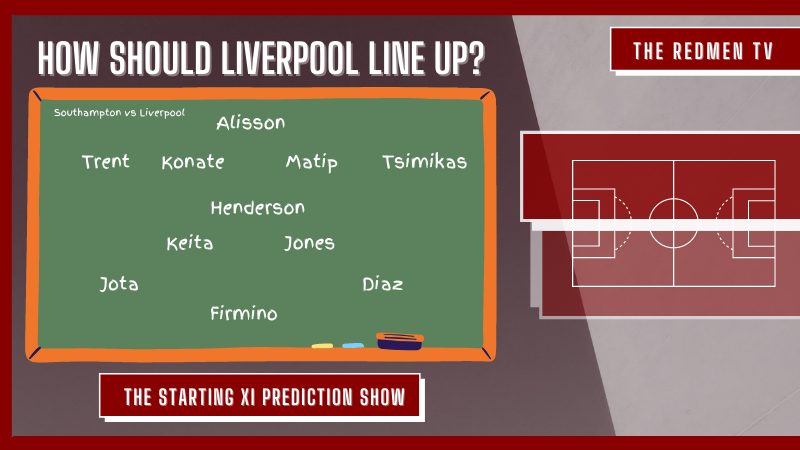 Alisson starts in goal behind a back five that sees Joel Matip and Kostas Tsimikas come in. There’s no need to risk Virgil van Dijk if he isn’t 100%, while the drop off in quality between Robertson and Tsimikas isn’t too significant. Joe Gomez is also an option should Klopp look to rest Trent, but I’d like to see Trent start before being replaced shortly after the break.

Jordan Henderson starts in the six with Fabinho still out, and I’d like to see Naby Keita start this one to counter-act Southampton’s style. His pressing abilities will be useful in stopping their key men get on the ball, and he’s supported by Curtis Jones. While Oxlade-Chamberlain could also a part, his lack of minutes mean he’s unlikely to have the sharpness required to perform.

Roberto Firmino comes in for Sadio Mane who could still be a strong option from the bench. Diogo Jota and Luis Diaz complete the line up, with the two wingers able to utilise the space that Bobby leaves in behind to counter-act their slightly less familiarity with producing from the right flank. I’ve kept Diaz on the left to ensure he is impossible to defend in 1v1 situations.

Despite some tiredness, Southampton’s season is effectively over here – and that factor should be the one that plays most into our hands. Liverpool need to start fast and take full control of the game before making some changes to play out a safe three points.

How does Paul think we will line up? Check out the starting XI prediction show below!