We’re three games in and there’s already a battle at the top of the Premier League table. Liverpool welcome Arsenal to Anfield in a match which the Reds have enjoyed success in over recent seasons.

The Gunners look a different side this season after acute transfer business, but this could be the perfect time to play them before Nicolas Pepe becomes settled into the side.

Liverpool must avoid silly mistakes. Arsenal are much more capable of punishing errors than the likes Norwich and Southampton. 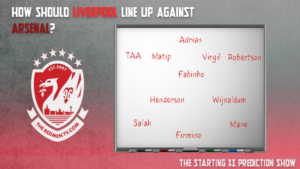 We can be confident in Adrian; he made some good saves other than two moments kicking the ball away too slowly. The Spaniard retains his place behind the same back four – but he must expect that opposing managers will now look to apply pressure.

Ox hasn’t quite reached the levels we know he can play at yet – it will take time after a long time out. For now, Klopp’s best midfield is Fabinho, Wijnaldum and Henderson.

A weeks break means the front three will be fresh to start. Despite some underwhelming first-half performances, the Reds have been clinical when given opportunities.

This game almost feels like a match against Manchester City when looking at the Arsenal attack on paper, but previous games have shown that this is a match which Liverpool should be winning.

Is David Luiz the answer to their defensive problems? There doesn’t seem to be an answer to Liverpool’s front three. I’m predicting a Liverpool win after weathering some pressure during leads.

How does Paul think Liverpool should line up against Arsenal? Watch our Starting XI Prediction Show for FREE below!