One of the biggest positives to take into this weekend’s game against Aston Villa is that Dean Smith doesn’t have Luka Modric and Toni Kroos at his disposal.

Liverpool struggled against Madrid on Tuesday but the performance wasn’t as bad as some are making out. Mane was clearly fouled before the second goal, though the Reds must cut out the calamitous mistakes at the back.

The Reds were left embarrassed the last time the two sides met in the Premier League which means there has to be a reaction this time. Villa are without Grealish, but that doesn’t matter; whether Liverpool perform, does.

A win for Klopp’s side will see the Reds move into 4th place which could be held onto if Chelsea and West Ham drop points. Liverpool are well in this top-four race. 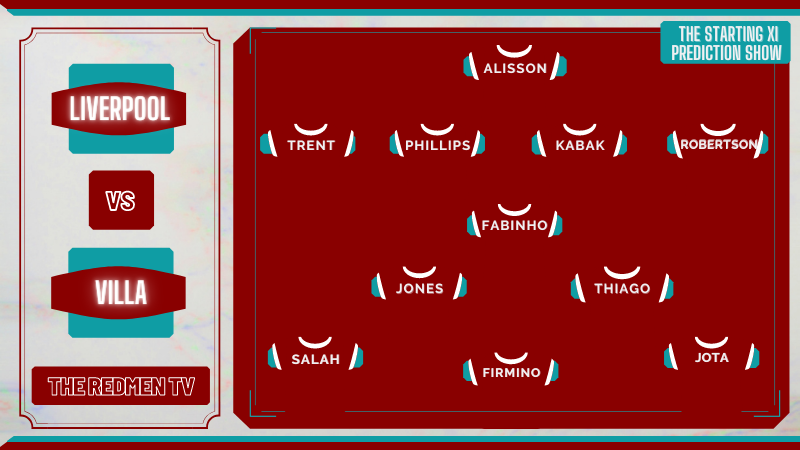 No changes to the backline. Nothing needs to be said about Trent’s error against Madrid – mistakes happen. Kabak and Phillips remain at the heart of the defence and will bring the lessons from the champion’s league clash with them.

Fabinho wasn’t at his best either but there’s no denying the Brazilian’s talent. He comes back in with Thiago and Curtis Jones more advanced.

Changes to the front three should see Roberto Firmino come back in centrally with Jota starting out wide in place of Sadio Mane. Sadio hasn’t been in his best form this season but the Senegalese star will be back to his best once the fans return.

Liverpool should have enough to win this one despite coming off a loss in Spain. Villa have won just one of their last five while the Reds look to be much better going forward in recent weeks.