Starting XI: How should Liverpool line up against Brighton?

The Reds return to Anfield this weekend as Liverpool take on Brighton. It’s a fixture which Liverpool have enjoyed success in the last few seasons, but Klopp must ensure the squad is focused ahead of a long Christmas fixture list.

Fabinho’s availability has gone from missing this weekend to out until the new year. It’s an unwanted blow to the league title challenge, but under the scope of optimism, this is the run of games where the Reds can afford a setback.

Klopp’s biggest challenge for the next month is finding who will come in for the Brazilian midfielder who has been in world-class form. It’s not possible to directly replace Fabinho, but we can select the best fit for each opposition. For the likes of Brighton, who will undoubtedly look to park the bus, Lallana or Wijnaldum should start in place of Fabinho

How should we line up? 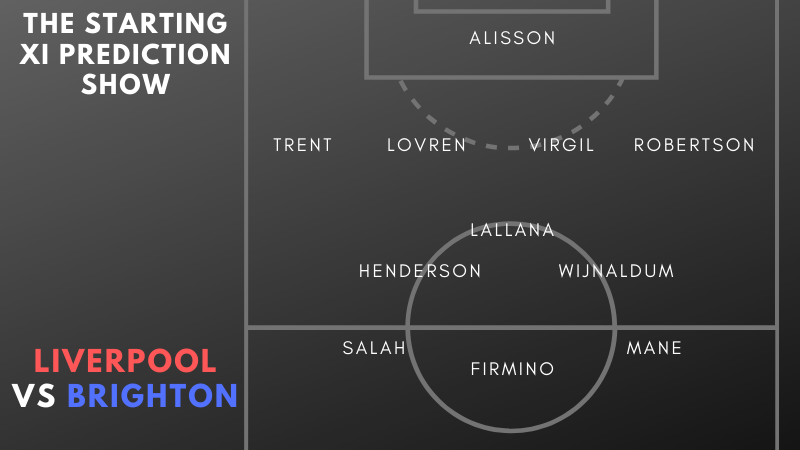 Lovren’s performances continue to impress which means he maintains his spot alongside Virgil. Gomez isn’t in his best form at the moment, but at just 22, he will continue to improve and recapture some of his best displays we saw last season.

Trent returns to the side and is a player who will be vital in the remaining Premier League games. If Klopp isn’t going to look to Neco Williams when resting TAA, we may need to look for short-term cover in January.

Lallana should start in the six behind Henderson and Wijnaldum. While Ox has been in good form from central positions, he must be saved for when the Reds need to be more attacking. Liverpool need some solidity in midfield with the majority of attacks coming from the wide areas.

The front three remains the same in a game which they could all score in if Liverpool strike early.

How does Paul think we should line up versus Brighton? Check out his starting XI prediction show below!