Starting XI: How should Liverpool line up against Brighton?

Liverpool’s return to form continued at the London Stadium on Sunday as the Reds scored some of the best goals of Klopp’s tenure. The Reds made a statement of intent; we’re not going anywhere yet.

Two new faces could join the match-day squad on Wednesday night as Preston’s Ben Davies and Schalke’s Ozan Kabak both reinforced a depleted defensive unit with news that Joel Matip will join Virgil van Dijk and Joe Gomez on the injury list for the rest of the season.

Takumi Minamino’s loan move to Southampton suggests that we could see the return of Diogo Jota. Taki has been unlucky to not get more opportunities but should feature in most games for the Saints; a win-win for both sides. 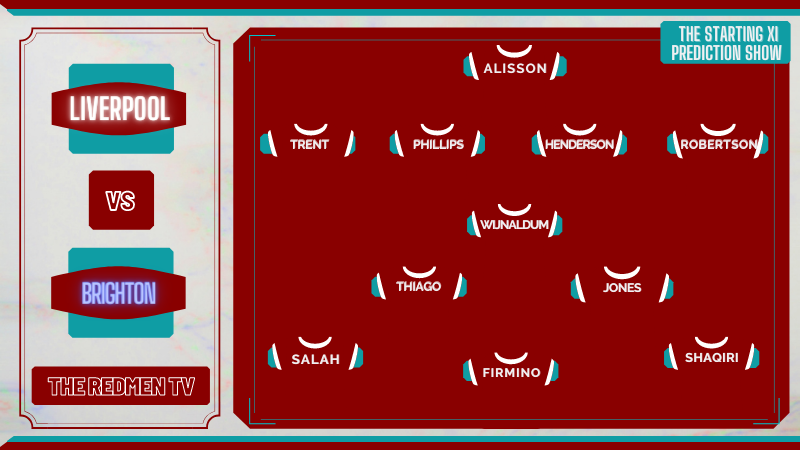 Nat Phillips recent performances deserve credit which should keep the young defender involved in the starting XI. New arrivals Kabak and Davies will need time to become accustomed to Klopp’s system which allows Liverpool to field an unchanged back four from the 3-1 win against West Ham.

The midfield is finding groove with Wijnaldum and Thiago looking unplayable in the last two matches. Brighton may opt for a more pragmatic approach at Anfield which means Curtis Jones makes the most sense for this one.

Sadio Mane is unlikely to be available with Manchester City on the horizon which means Xherdan Shaqiri keeps his place out-wide. Roberto Firmino returns to the side with the in-form Mo Salah on the right flank.

Confidence is growing on Merseyside with Klopp’s side finally clicking again. Mo Salah looks to be reaching his peak-performance level for the season which is bad news for the Reds’ opposition. It’s difficult to see past a Liverpool win which sets up an enticing clash against City at the weekend.