Liverpool travel to Stamford Bridge this Sunday in a game which is set to be crucial in the race for the Premier League title.

The Reds shouldn’t be too downhearted about Tuesday. The performance was much better than last time out at the San Paolo Stadium and on another night we take our two big opportunities to go in front.

Chelsea are not as strong as they have been in previous campaigns. But, that said, it’s a game which they will always be up for as they showed in Istanbul. Klopp’s side must be clinical if we are to take all three points away from home. 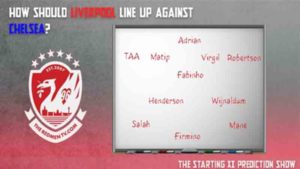 There’s still no confirmation on Alisson yet, but Adrian has looked solid so far. The Spaniard maintains his place.

The back four should remain the same. Gomez would have been a good option away in Napoli to rest Trent, but the late Sunday kick-off means he should be ready to go again.

Wijnaldum will be fresh to come back into this team and it’s a case of Henderson or Oxlade-Chamberlain for this one. Ox played well against Newcastle which means it will depend on the approach which Klopp goes for; should the Reds go all out? I’ve gone for Henderson for a more solid approach.

Salah, Mane and Firmino start upfront. Midweek is where Klopp can look to rest one or two against MK Dons.

Frank Lampard’s Chelsea have been unpredictable this season and have shown they can cause teams trouble, but in this one, they will be wary of Liverpool’s attack. In terms of current form, the Reds should be able to pull off an important victory which will be a statement of intent towards Manchester City.

How does Chris think Liverpool will line up versus Chelsea this weekend? Check out his starting XI prediction show below!