By Adam Brown (@AdamMNVi) A stellar performance at the Puskas Arena was just what fans needed to see before this weekend’s Merseyside derby. It was the Liverpool we know. RB Leipzig have been Bayern Munich’s closest competition for a Bundesliga title this season, but you wouldn’t have known it from the countless mistakes forced by Klopp’s aggressive press. The level of intensity displayed in Hungary is the level required for Saturday’s game against Everton. Carlo Ancelotti has revealed his hand. The Blues will be desperate to break the Anfield curse – and won’t shy away from the sort of challenges we saw on Thiago and Virgil van Dijk back in October. Liverpool’s intensity must overwhelm Everton on Saturday without being drawn into silly challenges. Ancelotti’s side will use theatrics to upset Klopp’s flow – and anyone in the Reds XI would be forgiven for going into this game with a chip on their shoulder. Mo Salah’s call to arms on social media could prove to be the turning point for what has been the most difficult season in Klopp’s tenure. Naby Keita is back in training and could feature from the bench. Fabinho, James Milner and Diogo Jota are unavailable but reported to be ‘closer’ to returning. 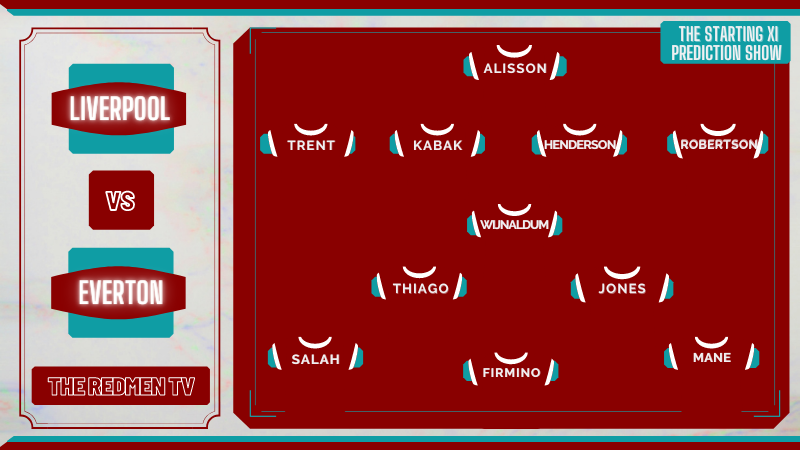 There’s no need to change the back five after Ozan Kabak shined in the Champions League. The young centre-half won’t be going anywhere if those level of performances continue – £18 million could be a steal. Wijnaldum continues in the six behind Thiago and Curtis Jones with a midfield who are beginning to grow cohesion. Jones is getting better every game, while talk of Thiago not suiting our style is nonsense; the Spain international has already shown the quality he adds and is still settling after a lengthy spell out of the side through injury. Mo Salah and Sadio Mane should start on the wings after scoring on Tuesday night. Roberto Firmino completes the side. Klopp said Liverpool won’t be taking in any emotions from the previous meeting, but that seems impossible. The tackles in October threatened the careers of Virgil and Thiago. Revenge will be on the mind. Score prediction: Liverpool 3 – 0 Everton