Starting XI: How should Liverpool line up against Fulham?

Fulham are up next with three points vital for Liverpool to stay on target for a place in the top four. The Reds were taken by surprise at Craven Cottage last time out as Scott Parker’s side came away unlucky to not take all three points; Klopp’s side must leave no room for complacency this time around.

Klopp could opt to rest some players with the second leg in the Champions League against RB Leipzig coming up in midweek but Liverpool should feel less pressure with a 2-0 advantage secured. 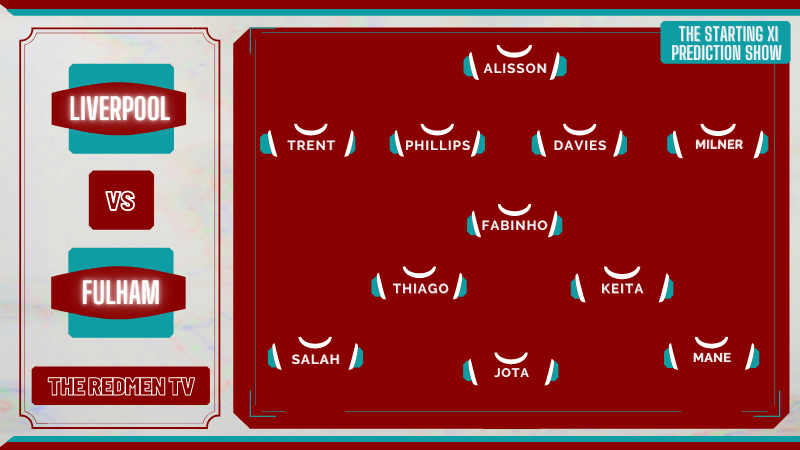 Klopp confirmed Ozan Kabak is a doubt for Sunday so it’s time for yet another centre-back pairing. This season has been one of those Football Manager saves where the injury list is merciless.  Nat Phillips has rarely put a foot wrong this season so deserves to start, but it’s also time for Ben Davies to make his debut.

James Milner comes in at left-back with Andy Robertson playing a lot of minutes of late – the Reds can’t risk another injury to a key player and Milner’s leadership is vital in the absence of Jordan Henderson.

Normally there wouldn’t be a need for a dominating number six but Fulham’s fast-paced attack means Fabinho should start in the six. Liverpool can’t continue to drop points against teams in the bottom half. Keita and Thiago complete the midfield with Curtis Jones rested for Tuesday night against Leipzig.

Diogo Jota’s sharpness could be the difference for the rest of the season which means the Portuguese star needs to get minutes. I’ve gone with him from the start here with Salah and Mane providing support from the flanks.

Liverpool need to make a statement to put pressure on those in the top four race and a comfortable win would do just that. Once Klopp’s side are back to full form there will be no question of a strong finish.

How does Chris think we will line up? Check out the Starting XI Prediction Show below!