Starting XI: How should Liverpool line up against Leeds?

Leeds United are up next in a game vital to Liverpool’s hopes of qualifying for next season’s Champions League.

Jurgen Klopp got the tactics right on Wednesday night as the Reds created chance after chance against Real Madrid – though it was nothing short of a finishing disaster-class.

Liverpool must convert chances if we’re to avoid the Europa League. Missing easy opportunities have cost the Reds countless points this season, while VAR and an unlucky injury record hasn’t been too helpful either.

With Bielsa’s side showing they’re able to snatch results with minimal attempts on goal – Liverpool must be clinical on Monday night. 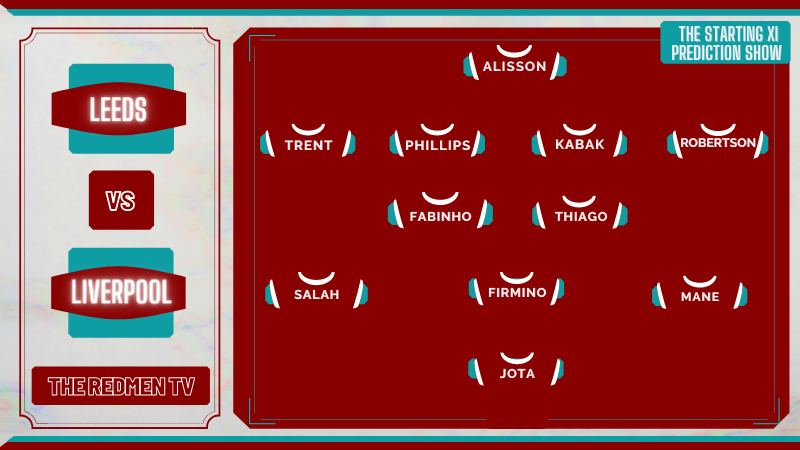 No changes needed to defence after a good break in between games. Nat Phillips continues to impress, while Ozan Kabak’s performances have looked beyond his years for a 21-year-old.

Thiago starts alongside Fabinho with the Reds requiring aggression in this one. Firmino has shown his class when linking play which shows the Brazilian should probably move back into midfield – Bobby comes into the ten for this one.

Diogo Jota looks to be Klopp’s most clinical weapon currently and should start up front at Elland Road. Sadio Mane and Mo Salah complete the lineup.

Three wins on the bounce in the Premier League shows signs that Liverpool are peaking at just the right time, and with a more favourable run of games to the end of the season, a win against Leeds could make Klopp’s side favourites to get into the top four.

How does Chris think Liverpool will line up against Real Madrid? Check out the Starting XI Prediction Show below!