Starting XI: How should Liverpool line up against Leeds?

For the first time in thirty years, Liverpool will begin a league campaign as defending champions.

Up first for the Reds is a test against Marcelo Bielsa and newly promoted Leeds United.

The last time the Peacocks played in the Premier League was a 1-0 defeat against Chelsea in 2004 – a game in which James Milner featured.

If James Milner plays against Leeds on Saturday, he will have played in each of Leeds' last 31 Premier League games. And against someone who turns 57 this month in one of them.

The Reds moved closer to securing the signing of Thiago as reported by Constantin Eckner (@cc_eckner) this week. The Spanish international would be an exciting addition if a deal can be reached, but there’s no need to panic yet; the transfer window will remain open until October 5th. 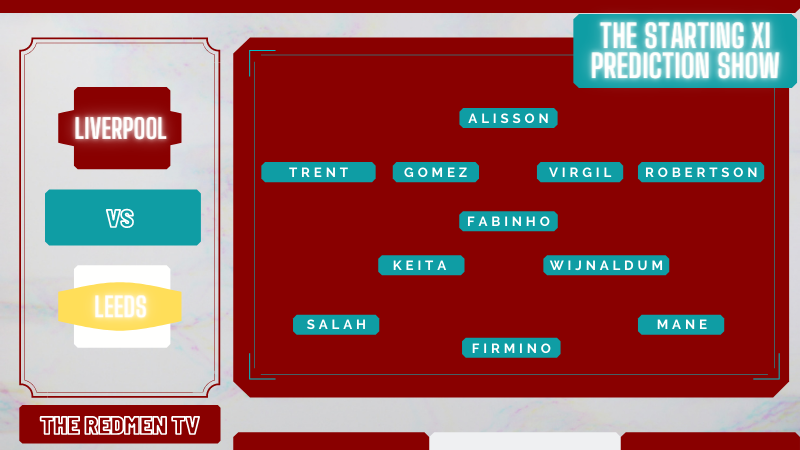 Liverpool’s most used back five will depend on who wins the battle to start between Joe Gomez and Joel Matip. Klopp should start with Gomez for now, but the Cameroonian won’t be short of games with a lack of senior options at centre-back.

Kostas Tsimikas won’t feature in the squad after testing positive for Covid-19.

Jordan Henderson has recovered from injury but will need time to get back up to sharpness ahead of the new campaign. That means Fabinho will begin in the six.

Competition for places will be most active in the two midfield spots – even more so if Thiago signs. Keita and Wijnaldum should start for this one with the Guinean more advanced of the pair.

Minamino has been one of the Reds most impressive players in pre-season and could arguably start for this one. The Japanese star will have a part to play if the main front three aren’t firing on Saturday.

Leeds shouldn’t be too negative which could make for an entertaining game to kick-off the season, but the Yorkshire side are unlikely to beat the Reds in a shoot-out.