Ten points separate Liverpool and Leicester as the Reds travel to the King Power Stadium on Boxing Day.

The Foxes form has dropped since being held by Norwich, but Brendan Rodgers will know a defeat to the Reds will create an insurmountable gap which ends Leicester’s title challenge. 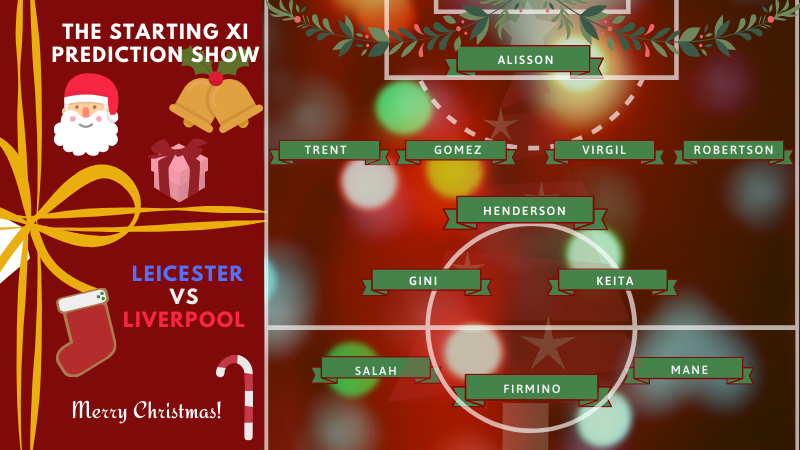 Joe Gomez is beginning to recapture some of his best form after back-to-back impressive performances in Doha. Full strength is required here which should see no changes to the back four from the Club World Cup final.

Who will play in the six when Fabinho is out? Jordan Henderson will. The captain has shown why he is so valuable to Liverpool, finding consistency in recent weeks which has seen him contribute massively in attack and defence.

Wijnaldum should be ready to come back in which leaves Naby Keita or Curtis Jones as the two options for the more advanced midfield role – Start with Naby and bring on Jones if the midfield isn’t creating enough; the youngster has impressed in every appearance for the first team this season.

Roberto Firmino should start if fit after Christmas celebrations on Wednesday night. The Brazilian got into good situations against Flamengo which indicates the goals of Christmas present could be in high volume for Bobby before the new year. Salah and Mane complete the front three.

The Foxes have impressed this season but didn’t create many chances at Anfield earlier in the season. Leicester must win to stay in the race which should mean gaps for the Reds to exploit in counters and quick transitions. Take our chances and the three points will be secured.

Merry Christmas and happy holidays to Reds around the world