Starting XI: How should Liverpool line up against Leicester City?

A trip to Leicester City is up next for Liverpool after a heavy defeat against Manchester City. While hopes of retaining the Premier League look bleak, the Reds must do everything to find form worthy of a top four finish.

Jurgen Klopp’s side look to be one of the teams suffering most from empty stadiums. If there ever was going to be an asterisk on a title year – it would be this season.

Injury woes continue with news that Fabinho is unavailable for this weekend and could also miss out against RB Leipzig. Naby Keita is edging closer to return while Diogo Jota should also be back in a fortnight. 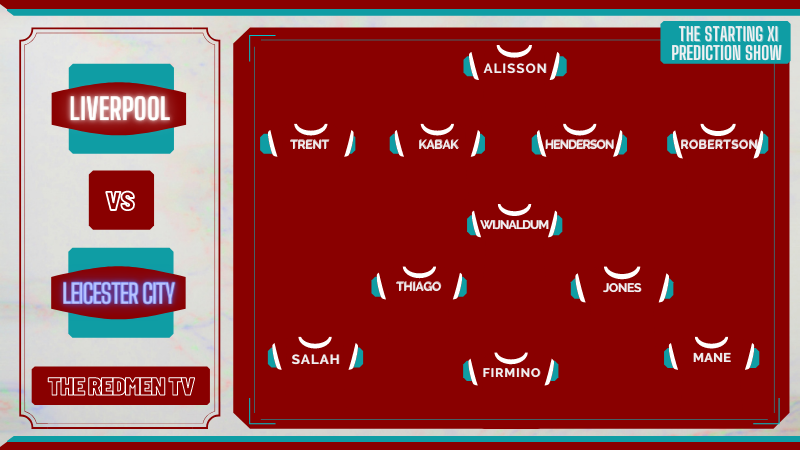 Ozan Kabak should be a definite feature with Fabinho out. Jamie Vardy’s presence means Klopp should prefer Jordan Henderson over Nat Phillips. No changes elsewhere at the back. Alisson will bounce back after a rare mistake from the world class Brazilian.

One change to the midfield that started against Spurs should see Curtis Jones involved. The young midfielder was Liverpool’s best player against Manchester City and showed signs that the defensive side of his game is improving. Wijnaldum and Thiago complete the midfield three with Gini operating from the six.

The main front three are back but performances must improve with Diogo Jota returning later this month. Liverpool’s attack is lacking consistency. With no one able to put together a run of good games, the Reds’ normally unplayable front is looking out-of-ideas. That said, a good performance would be perfect preparation for the impending Champions League knock-outs – a tournament we could soon be prioritising as hopes of retaining the league title fade.