Just as Liverpool looked to be turning a corner, the low-block conundrum resurfaced. Mo Salah should have scored early on before Brighton took control. The Reds must find a solution to the teams sitting deep. And fast.

The biggest positive of playing against Manchester City is Pep Guardiola’s side won’t come and park the bus. On the other hand, City remain the sole in-form team in the Premier League. A defeat for the Reds would almost certainly be the end of the Premier League title defence.

Jurgen Klopp should field a strong Liverpool line-up with news that Fabinho, Alisson and Sadio Mane have trained. New signing Ozan Kabak has received international clearance. The Turkish defender’s physicality makes him a good fit for Sunday – but could it be too soon? 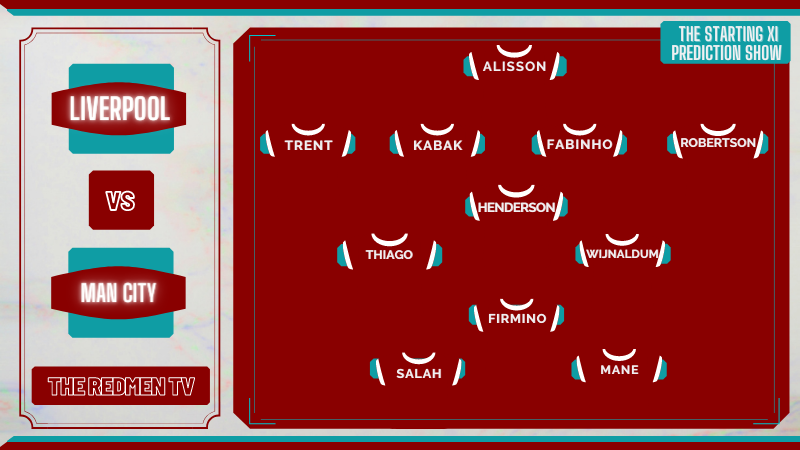 Alisson returns in goal after a good performance from Kelleher midweek.

Nat Phillips has done nothing wrong and should be a big part of Klopp’s plans for the rest of the season, but Ozan Kabak should start this one; there’s no better way to get accustomed to the tempo of the Premier League than coming in against the league’s best outfit.

The skipper moves back into the midfield at the base of a narrow diamond. Liverpool are looking stagnant in the 4-3-3 and need to dominate the middle of the pitch. Thiago and Wijnaldum offer balance behind Roberto Firmino who could benefit from playing in his natural position.

Salah and Mane start upfront in a front pairing which will threaten City in behind.

Liverpool’s style must return to the instinctive play which has been so successful throughout Klopp’s tenure. Manchester City will leave space to exploit which should mean more chances created, but this one will be won in midfield. While it’s going to be nerve-wracking, Liverpool can return to winning ways after back-to-back home defeats.