Starting XI: How should Liverpool line up against Manchester United?

Premier League football returns this weekend with Liverpool hosting Manchester United at Anfield. Klopp will be desperate to return to winning ways after not picking up maximum points in the league since the 7-0 win at Crystal Palace.

Form has seen United go top after picking up three points in midweek, but their stay at the Premier League summit could be a short one if the Reds can deliver once again in a big game.

Liverpool edged past Aston Villa U18s in the FA Cup last time out with Thiago Alcantara and Xherdan Shaqiri changing the game when introduced at half-time. The four goals scored at Villa Park will hopefully be the catalyst needed to spark Liverpool’s attack. 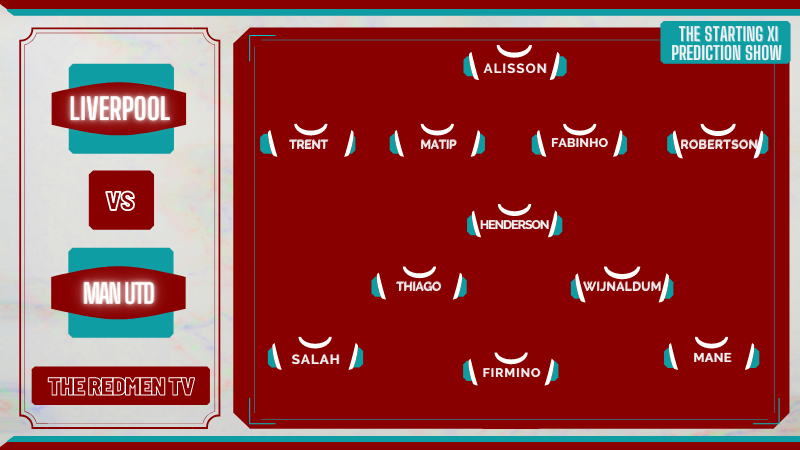 Klopp refused to rule Joel Matip out of Sunday’s clash which means Liverpool could field their strongest possible back four. Trent and Robertson return after being rested against Villa.

Speaking on the Cameroonian defender, Klopp said: “Joel is close but does it make sense now to throw him in with one or two sessions he didn’t do yet? We have to see.”

The Liverpool manager also confirmed Naby Keita will be unavailable with the Guinean ‘not ready yet’.

While Shaqiri’s recent performances are worthy of a start, Liverpool should begin with the safe midfield of Henderson, Wijnaldum and Thiago. The former Munich maestro looked a league above the rest of the team last Friday and could be the talisman in putting together a run of results.

Mane, Firmino and Salah start up front, but players starting in both midfield and attack must now perform with Shaqiri a viable option off the bench.

There’s little hope of a win if the Liverpool from the first-half against Villa turns up, but the Reds will be much more motivated for this clash at the top of the table. Anfield has been a fortress against top teams this season with positive results against the likes of Spurs, Leicester, Wolves and Arsenal.

United are looking improved since last year but not without heavy elements of luck with a number of results; dubious penalties, random deflected goals and miraculous comebacks. VAR has looked like it’s controlled by Howard Webb at times this season with the stark contrasts in fortunes between the two sides.

That said, the Reds are more than capable of securing all three points on Sunday if Klopp can nullify the threat of Bruno Fernandes.

How does Paul think Liverpool will line up? Check our the Starting XI show below!