The international break has passed. The year is still 2019 and Liverpool remain top of the league after a perfect start to the Premier League campaign.

There have been no major fitness concerns as the players return to Melwood ready to face Newcastle. The Magpies are without Kylian Mbappe after the takeover bid fell through and have been underwhelming in the opening four games.

This should be a game where Liverpool are confident of taking all three points with players returning in form. Wijnaldum is finally getting the credit he deserves as rival fans begin to tell us how good he is; the Dutchman is showing he can perform regardless of opposition. 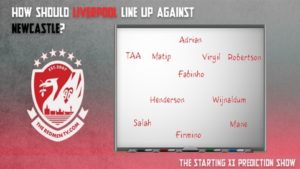 Alisson is making good progress but there’s been no confirmation of his return yet. Adrian has done well other than a couple of mistakes with distribution. The back four remains the same.

Klopp could make some changes against weaker opposition here but it’s difficult to change the side after the quality of the Reds performances at Anfield this season.

The front three all start where Klopp should look to put the game out of sight early and then withdraw with Napoli in mind next week.

Newcastle’s 20% possession against Spurs is a good indicator of how Bruce will set up his side but it’s a strategy which many have tried and failed at Anfield. The width provided by Trent and Robertson makes it difficult to restrict dangerous balls coming into the box without leaving space for the front three to operate in. Heavy-metal football.