Starting XI: How should Liverpool line up against Norwich?

Liverpool head to Carrow Road on Saturday with the hopes of moving one step closer to cementing the capture of the Premier League title.

The Reds have been unstoppable this season. Sitting 22 points ahead of Manchester City, now just 13 games remain. Pep Guardiola’s side have conceded nearly twice as many goals (29) as Liverpool (15), creating an insurmountable gap between the two sides which has sparked the realisation that Klopp is only just getting started; the Reds have evolved, and as warned, will compete every year for the title – a new standard has been set.

It seems so long ago that the Reds kicked off the Premier League campaign at home against Norwich. An opening night win lead to a record of 24-1-0, and 73 points later, this season has turned out to be one of the most memorable in Liverpool’s history.

For Norwich, a difficult campaign has seen the Canaries fall to the bottom of the table. It is indicative of the challenge many teams face when trying to play positive football; Pellegrini struggled to implement his style at West Ham before the return of Moyes, while a more pragmatic Dyche approach at Burnley seems to find more wins in the long run. 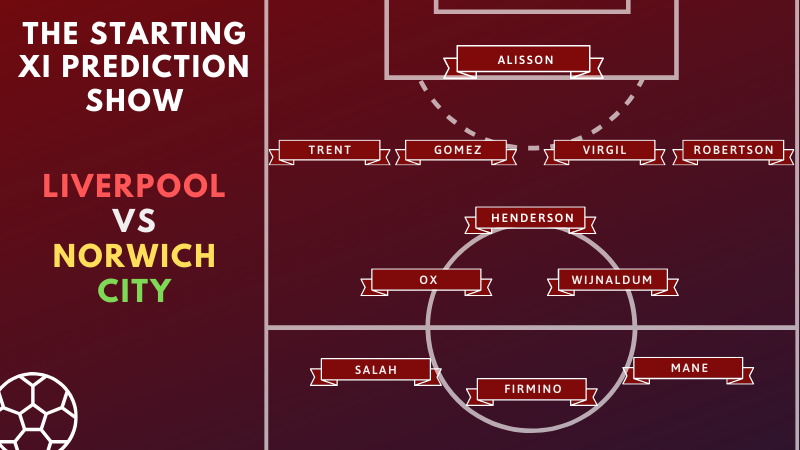 A refreshed Liverpool squad will mean few changes to the side from before the break.

Alisson starts behind a centre-back pairing of Virgil and Joe Gomez. Lovren could return against Diego Costa vs Atletico Madrid on Tuesday.

Henderson remains in the six. While some fans may want Fabinho, the Reds should favour a more attacking approach against Norwich, meaning Wijnaldum and Ox are stronger options in midfield. The Brazilian can come on in the second half to shut the game down.

Klopp can make changes once the league is confirmed. For now, stick with the main front three. We have to respect Norwich who have already beaten Manchester City this season.

How does Chris think Klopp will select the side? Check out the Starting XI Prediction Show below!