Starting XI: How should Liverpool line up against Real Madrid?

Liverpool managed to keep a good spell in the league going with a win against Aston Villa but now it’s back to the task of overturning the deficit against Madrid.

There’s reason to be optimistic with some of the Spanish sides absentees – but we shouldn’t forget that Liverpool are without Henderson and only last month found a reasonably consistent centre-back partnership in Ozan Kabak and Nat Phillips.

Stopping Modric and Kroos seems vital this week. The two veterans bossed the midfield last time out which saw Zinedine Zidane’s side work their way out of the press. If Liverpool score the first goal – Klopp’s side can easily get through as Madrid will naturally look to preserve their lead. 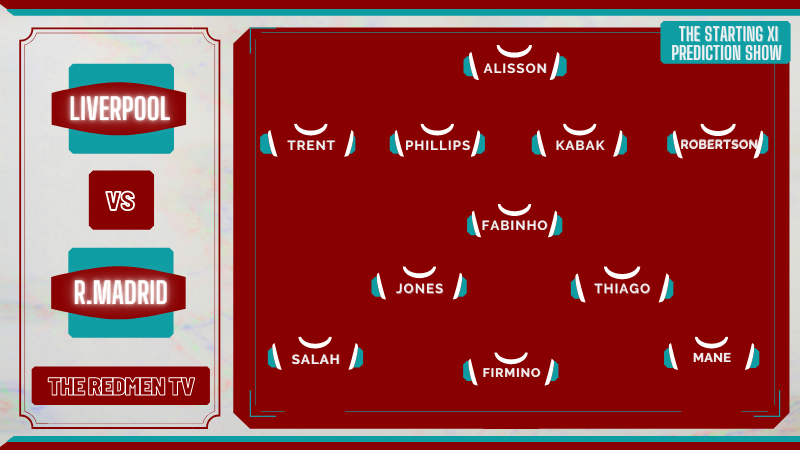 No need to change the defence. While Kabak and Phillips came away with some lessons to learn in Spain, Klopp doesn’t have another viable option. Trent’s goal should hopefully give him the confidence to play aggressively on Wednesday.

Fabinho starts in the six after playing much better at the weekend against Villa. The Brazilian needs to dominate this game as he did against Barcelona two years ago. With the game against Leipzig in mind, I’ve gone for Thiago and Curtis Jones here. Klopp needs to be aggressive and Curtis Jones can provide the quality required to break the deadlock.

Firmino starts here with the press needed at its best. Sadio Mane hasn’t been at his best this year but he was definitely fouled in the build-up to Madrid’s second goal. For a player who is honest and doesn’t go down at the slightest hint of contact, it’s sad to see some of the treatment the Senegalese star has received from the referees.

It’s not going to be easy but Liverpool can get the job done; take control of the game early with a first-half goal and put the Spanish giants under early pressure.

How does Chris think Liverpool will line up against Real Madrid? Check out the Starting XI Prediction Show below!