Starting XI: How should Liverpool line up against Real Madrid?

Three wins and as many clean sheets have given Liverpool perfect preparation for the first leg of the Champions League quarter-final tie against Real Madrid.

The Reds are peaking late on in the season, with Fabinho looking like the best number six in the world since being reinstated into Klopp’s midfield. The Brazilian has been formidable alongside Thiago who is also beginning to settle – it may not be too long before the kop is called on to produce another version of the ‘best midfield in the world’ chant.

A calf injury looks to have ruled Sergio Ramos out of both legs. You can only imagine the reaction the Real Madrid skipper would have got if playing at Anfield with a full stadium.

Klopp’s side will react, though. The result in Kyiv was tough to take with the nature of Salah’s injury. Now, much weaker than they were in 2018, Liverpool can claim revenge over the 13-time Champions League winners. 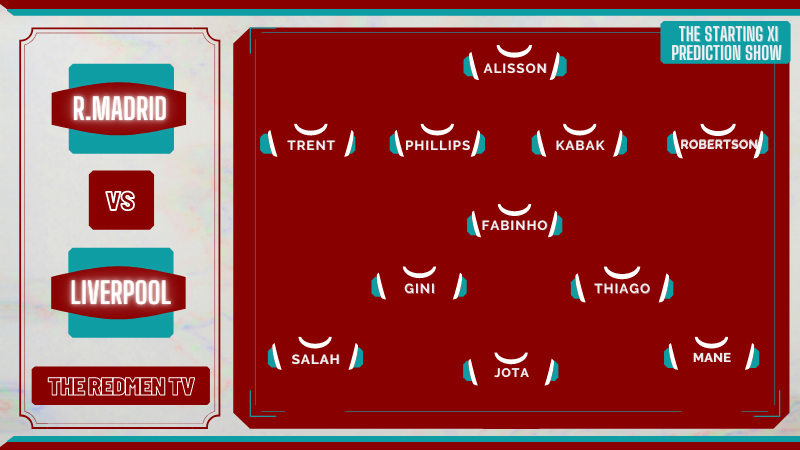 Consistency is key within the back four and Kabak-Phillips have been solid. Madrid’s attack isn’t as quick as what Liverpool have come up against so far, so the challenge will be different this time with intelligent movement in tight areas around the box. For this, the midfield battle will be key to keep Zinedine Zidane’s side out of the danger areas.

One change in the midfield sees Gini Wijnaldum come back in. Klopp seemed to have this game in mind with Wijnaldum starting from the bench on Saturday. Fabinho and Thiago complete the trio.

Jota’s form has produced six goals and an assist in the last five games for club and country. The former Wolves man was likely rested for this game and should start centrally with support out-wide from Salah and Mane. Firmino will come on from the bench and should make an impact whether upfront or in the 10 if Klopp changes shape.

Recent performances provide plenty of reasons for optimism which means the Reds should be able to get past a Madrid side who are much weaker than they have been in previous seasons.